Ravi Shastri, while wishing his mother on her special day, introduced her as his biggest critic and inspiration. 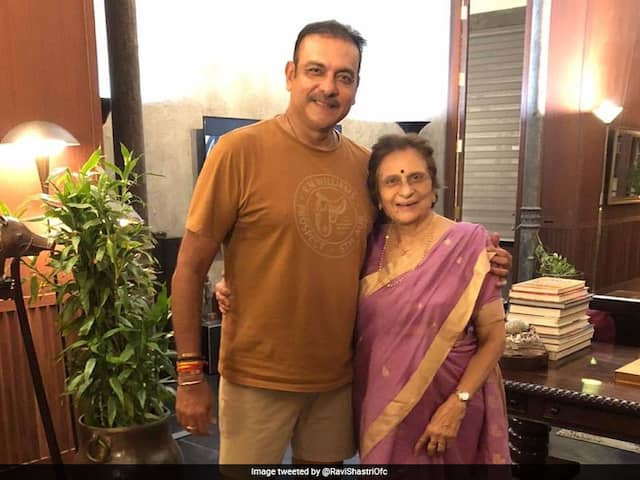 Ravi Shastri posted a warm message for his mother, who turned 80 on Wednesday.© Twitter

India head coach Ravi Shastri posted a warm message for his mother, who turned 80 on Wednesday. The former India all-rounder, while wishing his mother on her special day, introduced her as his biggest critic and inspiration. "To my biggest critic and inspiration. Happy 80th Mom. In singles from here on. No rush. God bless," Shastri tweeted. Shastri was reappointed the Team India head coach after the World Cup 2019. Since the start of his new tenure, India swept back-to-back Test series against the West Indies and South Africa. While the West Indies Test series win came away from home, India routed South Africa 3-0 playing at home. Since August, India have shared spoils only once in a Twenty20 International (T20I) series against South Africa, which ended 1-1.

To my biggest critic and inspiration. Happy 80th Mom. In singles from here on. No rush. God bless pic.twitter.com/6oTz85zMNu

A day before, Shastri also wished the Indian skipper Virat Kohli who turned 31 on Tuesday.

Shastri posted an image and wrote: "Happy birthday young man. Enjoy the break and have a kick ass year ahead. God bless. @imVkohli".

Ravi Shastri is currently in Rajkot where India is take on Bangladesh in the second T20I on November 7.

India trail 0-1 in the three-match series against Bangladesh after they suffered their first-ever defeat in the first T20I in New Delhi on Sunday.

India, playing without regular skipper Virat Kohli, now find themselves in a do-or-die situation as they need to win the second T20I to keep their hopes of winning the series alive.

However apart from the Bangladesh players, Indian team will also have to be wary of the Cyclone Maha threat which is looming large on the entire coastal regions of Gujarat, including Saurashtra.