Barring Snell Patel's resilient innings of unbeaten 87 for Saurashtra, all other batsmen failed to make any real impact. 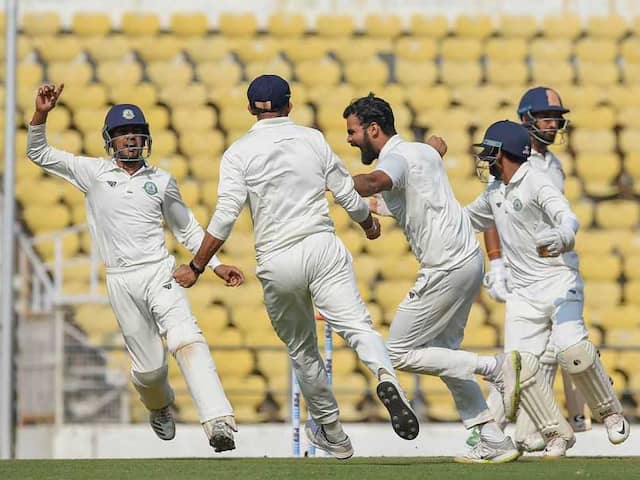 Defending champion Vidarbha gained an upperhand in the Ranji trophy final by the close of play on Day 2 as their spinners ran through Saurashtra's top order. Left-arm spinner Aditya Sarwate was the wrecker-in-chief, claiming three wickets in an impressive spell that included the key wicket of India's Test batting star Cheteshwar Pujara. Akshay Wakhare picked the other two wickets. Barring wicket-keeper batsman Snell Patel's resilient innings of unbeaten 87, all other Saurashtra batsmen failed to make any real impact, ending the on 158/5, 154 runs behind Vidarbha's first-inning total.

Sarwate (3/55) and off-spinner Wakhare (2/42) starred for the hosts on a surface that had something in it for the tweakers. Saurashtra were still 154 runs in arrears.

Patel had survived an appeal for a close catch off Wakhare's bowling when he was on 75.

Earlier, Vidarbha's Akshay Karnewar (73 not out), stood out with his splendid effort.

Sarwate took the biggest wicket when he cut short Pujara's stay at the crease to just 11 balls while Karnewar led their fight back with a dogged batting performance down the batting order.

The left-hander struck his second first-class half-century and added 78 runs for the eighth-wicket with Wakhare (34 off 78 balls) as Vidarbha added 112 runs in the first session.

Sarwate came in to bowl in the third over and the move paid off immediately as he trapped Harvik Desai (10) with his third ball.

At the stroke of tea, Sarwate struck again and trapped Vishwaraj Jadeja, who made 18 off 72 balls. Pujara was next and Sarwate induced an edge that flew to Wasim Jaffer at first slip.

Arpit Vasavada was dropped on zero by wicket-keeper Akshay Wadkar but the left-hander could not capitalise on the chance.

Wakhare got his back with a sharp-turning delivery, which took the edge and went to Jaffer in first slip. The off-spinner also sent back Sheldon Jackson (9) as Saurashtra struggled.

In the first session, Saurashtra bowlers could not get the breakthrough for 22 overs before left-arm pacer Chetan Sakariya got them the wicket of Wakhare.

Umesh (13) edged one behind off Jaydev Unadkat after finding two boundaries off Sakariya.

The tail added some more runs for Vidarbha as Rajneesh Gurbani drove Unadkat for a four and Karnewar hammered Sakariya for a six. Makwana bowled Gurbani to end his team's misery.

Jaydev Unadkat Wasim Jaffer Cricket
Get the latest Cricket news, check out the India cricket schedule, Cricket live score . Like us on Facebook or follow us on Twitter for more sports updates. You can also download the NDTV Cricket app for Android or iOS.