The youngster registered the best figures by a debutant for Pakistan in T20Is, earning her the player of the match award. 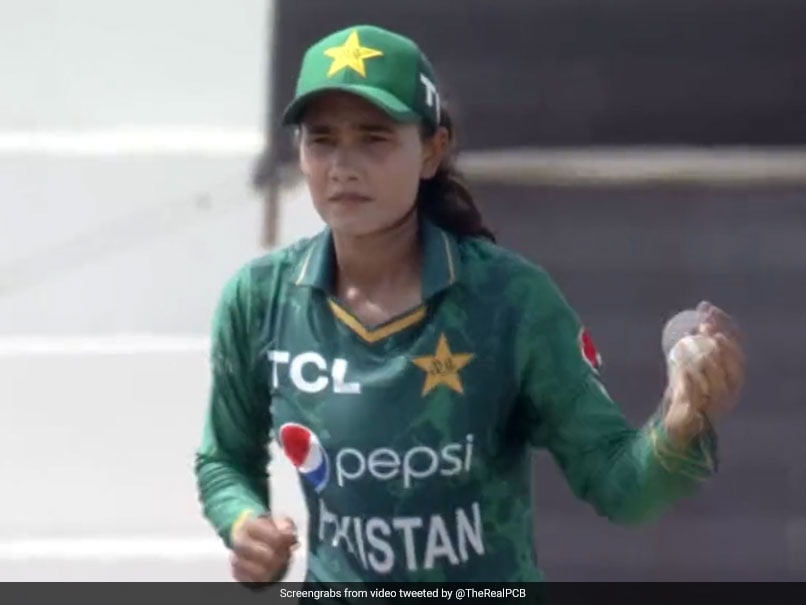 Tuba Hassan bowled the best figures by a Pakistan women's player on debut in T20Is.© Twitter

Leg-spinner Tuba Hassan produced a brilliant spell on her debut as Pakistan thrashed Sri Lanka by six wickets in the first T20I of the three-match series at the Southend Club in Karachi on Tuesday. The youngster registered the best figures by a debutant for Pakistan in T20Is, earning her the player of the match award. Tuba took three wickets for just eight runs, dismissing Harshitha Madavi, Anushka Sanjeewani and Kavisha Dilhari. The Pakistan Cricket Board (PCB) shared a clip of Tuba's debut spell on their official Twitter handle.

"An incredible spell by Tuba Hassan," the PCB had captioned the post.

Best bowling figures on debut for Pakistan Women in T20Is!

An incredible spell by Tuba Hassan

After electing to bat, Sri Lanka struggled to get going as Pakistan bowlers choked them for runs.

Left-arm spinner Anam Amin got Pakistan off to a perfect start, striking twice in as many overs to put Sri Lanka down to 13 for two in 3.2 overs.

Harshitha Madavi and Anushka Sanjeewani then stitched a decent partnership, adding 38 runs for the third wicket.

However, Tuba turned the game on its head, taking three wickets in her four-over spell, including a maiden.

Nilakshi de Silva played a cameo of 25 off 22 balls as Sri Lanka managed to cross the 100-run mark.

In reply, Pakistan received an early setback as opener Gul Feroza was dismissed for a duck by Dilhari.

Muneeba Ali (18) and Iram Javed (18) then provided some impetus to Pakistan's chase, before skipper Bismah Maroof (28) and Nida Dar (36 not out) took them across the finishing line with 10 balls to spare.

With the win, Pakistan took a 1-0 lead in the three-match series.

The second T20I will be played at the same venue on Thursday, May 26.

Sri Lanka Women
Get the latest updates on IPL Auction 2023 and check out  IPL 2023 and Live Cricket Score. Like us on Facebook or follow us on Twitter for more sports updates. You can also download the NDTV Cricket app for Android or iOS.