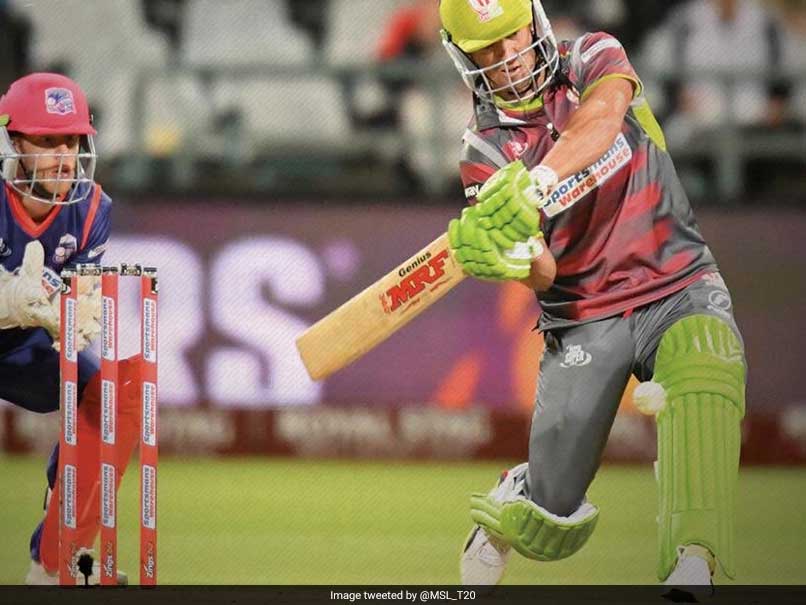 South Africa superstar AB de Villiers announced his retirement from competitive cricket in May earlier this year. Even though De Villiers retired, his latest performance in the Mzansi Super League, a South African domestic tournament, is a testament to why he is called Mr 360. In the opening match between Cape Town Blitz and Tshwane Spartans, De Villiers scored a fine half-century (59 off 30 balls) but a brilliant switch hit during his stay in the middle lit up the Newlands cricket ground. It was in the 11th over of the match when De Villiers played the switch hit to perfection as the ball flew over the boundary for a maximum.

In awe, fans took to Twitter to laud De Villiers for the switch hit.

A de Villiers switch hit to light up your entire lives, take that! #MSLT20

Ab de Villiers!! He Can't Do Anything Wrong Tonight! What A Switch Hit That Was!!!!!!!!!#ABDevilliers #MSLT20 #MzansiSuperLeague

What a switch hit by Ab de Villiers #MSLT20

As far as the match is concerned, Cape Town Blitz, batting first, lost three early wickets. However, a 100-run partnership between Kyle Verreynne (53) and Mohammad Nawaz (59) powered their team to a competitive 180/4 in 20 overs. For Tshwane Spartans, Andrew Birch was the pick of the bowlers as he returned with figures of 2/39 in his stipulated four overs.

In reply, Tshwane Spartans did not get the momentum they required as they kept losing wickets at regular intervals, eventually losing the tie by 49 runs.

Apart from De Villiers, Dean Elgar (32) and Rilee Rossouw (15) none of the other batsmen could touch the double-figure mark.

For Cape Town Blitz, Ferisco Adams struck twice in two balls to derail the opponents' run-chase. Adams finished the match with figures of 3/28 in 3.3 overs.

Talking about his outing, captain De Villiers said, "Always love playing in front of this crowd. I thought there was a decent crowd. They (Cape Town Blitz) adapted better to these conditions and came out on top. We didn't have enough partnerships, you need two or three good partnerships, but we lost wickets at regular intervals."

Tshwane Spartans will next play Paarl Rocks at the Boland Park in Paarl on November 18, while Cape Town Blitz will take on Durban Heat at Kingsmead in Durban on the same day.