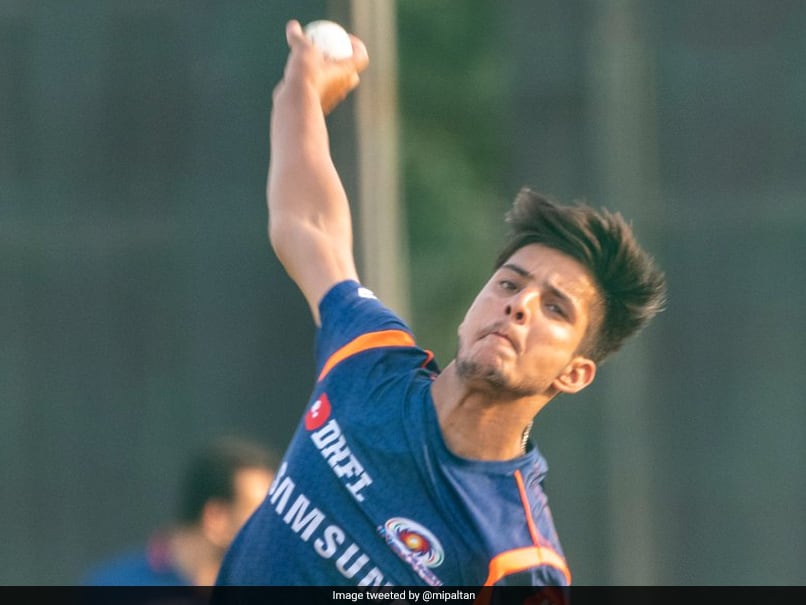 Mumbai Indians medium-pacer Rasikh Salam Dar impressed all when he made his debut for the franchise in the 12th edition of the Indian Premier League. His ability to bowl fast at 17 was seen as a welcome sign. While he played only one game, he was seen as a budding talent. But all is not well as the Jammu and Kashmir State Board of School Education has informed the Jammu and Kashmir Cricket Association (JKCA) that the cricketer has fudged his age.

As per documents accessed by IANS, the board has made it clear to the JKCA that the age Rasikh has provided to the cricket association doesn't match that of the board's record (as registered during his Class 10 examination).

JKCA now wants the Board of Control for Cricket in India (BCCI) to check on the same before the next course of action can be decided.

Rasikh was on June 9 named in the India U-19 team for the one-day Tri-series in England that will feature the hosts and Bangladesh. But the reply from the state board looks set to act as a barrier for him to embark on that tour.

Speaking to IANS, a former JKCA member said it was really sad that such a thing was happening in the presence of administrators in the association. "We have two administrators now and if such an episode happens despite their presence, it is indeed sad. They should be keeping a tab to ensure that players don't fudge their age as it is a sin and also deprives other youngsters of the opportunity to shine," he said.

Rasikh could be in deep trouble as the SC-appointed Committee of Administrators (CoA) in its meeting on May 18 last year had made it clear that any player fudging age could be banned for two seasons and criminal action may also be initiated.

"Players who are found (after a proper enquiry) to have submitted false/tampered birth certificates will be banned from all BCCI tournaments for two seasons. BCCI may also initiate criminal action against the concerned player and/or any other person responsible for submitting false/tampered birth certificates," the minutes of the May 18 meeting read.

The idea to punish those fudging their age was first proposed by former India skipper Rahul Dravid during his M.A.K. Pataudi Lecture as he called it as bad as fixing a game.

"The truth is that the player who has faked his age might make it at the junior level not necessarily because he is better or more talented, but because he is stronger and bigger. We all know how much of a difference a couple of years can make at that age. That incident will have another ripple effect: an honest player, deprived of his place by an overage player, is disillusioned. We run the risk of losing him forever," Dravid had said.

Mumbai Indians Cricket
Get the latest updates on IPL 2021, check out the IPL 2021 Schedule and Indian Premier League Live Score . Like us on Facebook or follow us on Twitter for more sports updates. You can also download the NDTV Cricket app for Android or iOS.