MS Dhoni and Hardik Pandya are not part of India's T20I squad, which will take on Australia starting November 21. 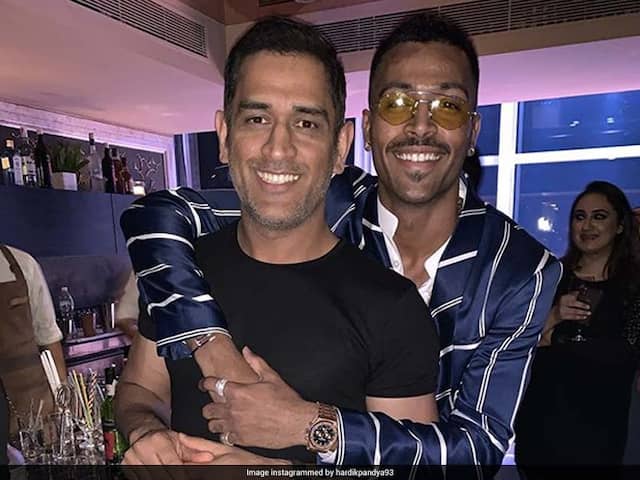 MS Dhoni hosted a party for his wife Sakshi on her 29th birthday in Mumbai on Sunday night. But it was all-rounder Hardik Pandya who grabbed everyone's attention after he expressed his "love" for the former India captain. "Forever love," Pandya captioned a picture on Instagram, in which he can be seen hugging Dhoni from behind. He continued to express his affection for the wicketkeeper-batsman with an Instagram story, which was followed by a few more moments from the celebrations.

Apart from Hardik Pandya, Sakshi also shared some of the glimpses of the birthday bash. Sakshi and Dhoni's adorable daughter Ziva was the centre of attraction in the star-studded party.

In some videos shared by Sakshi, Ziva is seen singing songs and having a great time with her friends and relatives.

Both Dhoni and Hardik Pandya are not part of India's T20I squad, which will take on Australia starting November 21.

India will play three T20Is, four Tests and three ODIs on their tour Down Under. The first T20I will be played at The Gabba in Brisbane on Wednesday.

After being left out of the recently-concluded T20I series against the Windies, which India won 3-0 under the captaincy of Rohit Sharma, Dhoni will also miss the T20I series on the gruelling tour of Australia.

Amid speculation that Dhoni's India career is at an end, India skipper Virat Kohli rubbished all such claims, adding that the World Cup-winning captain still remains an integral part of the limited-overs team.

"I think the selector has already explained what happened and I don't think I need to sit here and explain it more. I wasn't a part of that conversation but it is not what people are making out of it. I can assure you that he (Dhoni) is still a very integral part of this team and it was only about giving chance to others," Kohli said at a press conference.

"The selector felt that in T20 format, Rishabh Pant can be given a chance, he [Dhoni] anyway plays ODIs for us regularly. It was about giving a chance to a youngster and it has nothing to do with what people are thinking and I as a captain can certainly assure you that," he added.

MS Dhoni Hardik Pandya Sakshi Dhoni Cricket
Get the latest Cricket news, check out the India cricket schedule, Cricket live score . Like us on Facebook or follow us on Twitter for more sports updates. You can also download the NDTV Cricket app for Android or iOS.