MS Dhoni Wins Another Title, This Time In Tennis

In 2018, MS Dhoni has been struggling to get going with the bat. 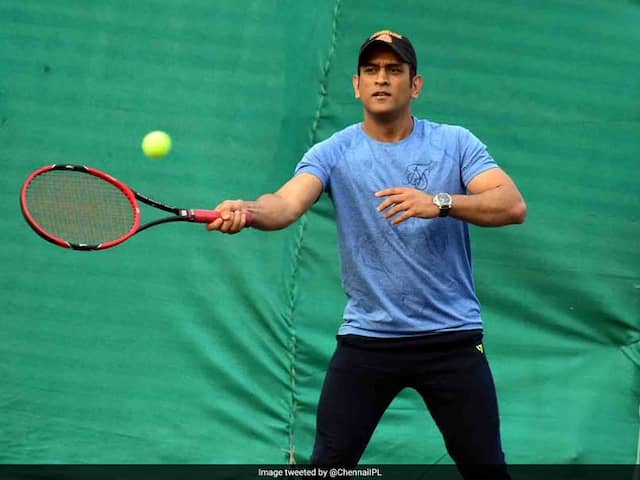 Former India captain Mahendra Singh Dhoni enthralled the crowd in Ranchi, but this time, instead of a cricket bat, he had a tennis racquet in his hand. The 37-year-old, who has won numerous titles as a cricketer, lifted a trophy in tennis by winning the JSCA Country Cricket Club Tennis Championship in Ranchi. Dhoni took part in the men's doubles category with a local tennis player Sumit Kumar and won the final 6-3, 6-3 in straight sets.

Dhoni sure seems to be keeping himself occupied during his time off from cricket at the moment. His continuous poor form resulted in him being axed from both the Twenty20 International (T20I) series against the Windies at home and in Australia.

In 2018, the 37-year-old has been struggling to get going with the bat. His last 50 came almost a year ago against Sri Lanka and since then it has been a lull.

Moreover, there have been speculations about Dhoni's participation in the 2019 ICC World Cup.

However, Dhoni's close friend and manager Arun Pandey revealed last month that the Ranchi player is in no mood to back off from a shot at the quadrennial event.

"It's been a long cherished dream of Dhoni - since he gave up the captaincy in white ball cricket - to play in the World Cup next year where he would be more as a mentor to the team. His idea was to give Kohli time to develop in this role and there is still no change in his thinking," Pandey said.

Dhoni's role as an ODI batsman has increasingly become debatable. In the recent past he has got the backing of the captain, coach and the chief selector.

His glove work has got better with time. But Dhoni the batsman has been missing.

It's almost certain that the 2019 World Cup will be the last hurrah for the best finisher of Indian cricket, but Dhoni would not want that to be primarily on reputation rather than overall form.