Former India captain MS Dhoni and his daughter Ziva were seen in a picture posted on Ziva's Instagram handle, where the daughter is riding on her father's back. 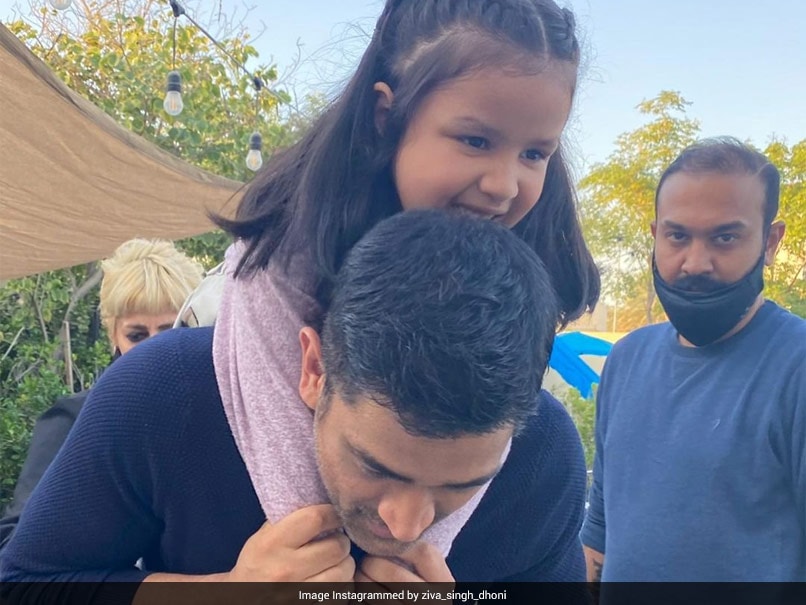 MS Dhoni and daughter Ziva were captured in an adorable pose.© Ziva Dhoni/Instagram

MS Dhoni was captured with his daughter Ziva in a picture posted on Ziva's Instagram account. Dhoni is seen carrying Ziva on his back even as people surround the father-daughter duo. MS Dhoni is married to Sakshi Singh Dhoni and the couple have a five-year-old daughter. Dhoni was last seen on the cricket field during the Indian Premier League 2020 where he led Chennai Super Kings. Dhoni retired from all forms of international cricket in August 2020 and his appearances on the field have been largely limited to the IPL. Recently, he was spotted with Yuzvendra Chahal and his wife Dhanashree Verma, as the couple visited Dhoni and Sakshi for dinner.

Dhoni, who finished as the wicket-keeper with most dismissals for India across formats, is only player to win all three men's limited-overs ICC trophies as captain.

Dhoni made his international debut for India in 2004 in a ODI against Bangladesh. He finished his career with 350 ODIs and 98 T20Is in addition to the 90 Tests.

Dhoni has played a mammoth 331 T20s in his career that includes 204 IPL matches for CSK and Rising Pune Supergiant.

MS Dhoni Cricket
Get the latest updates on IND vs NZ 2021, check out the Schedule and Live Score . Like us on Facebook or follow us on Twitter for more sports updates. You can also download the NDTV Cricket app for Android or iOS.