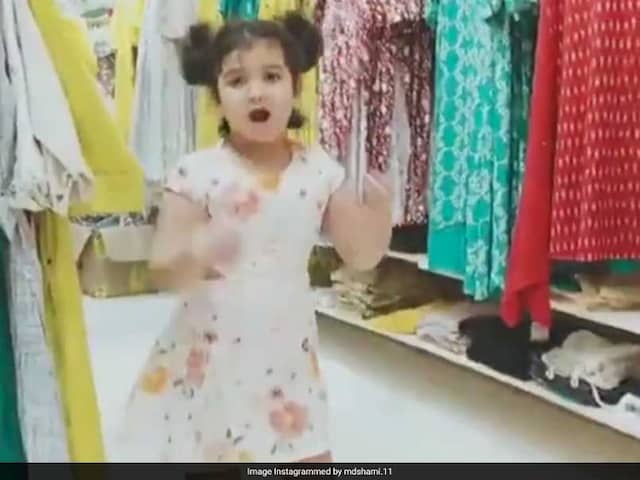 Indian pacer Mohammed Shami can bowl fiery spells of fast bowling, as South Africa found out on Day 5 of the 1st Test match against India in Vizag. But when it comes to setting the dance floor on fire, Shami is self-admittedly no match for his daughter. The fast bowler shared a video of his daughter dancing to a Bhojpuri song inside what looks like a store on Instagram and said she had better dancing skills that him.

"My doll. Has much better dances skills than her father," he captioned the video, where his daughter is seen dancing away in style.

My doll. Has much better dances skills than her father. #dance #futurestar #india.

"Awesome," wrote one user. Another user commented on how cute the video is.

"Allah bless her," another user commented.

"My cute little angel," one fan commented while another said she had nice moves.

Shami has been locked in a protracted legal battle with his wife Hasin Jahan, a former model, since March 2018. She has publicly accused Shami of having numerous affairs and harassment.

The charges carry a maximum punishment of three years in jail.

Shami has dismissed all the accusations as a campaign to defame him.

Jahan has also accused him of corruption.

Mohammed Shami Cricket
Get the latest updates on IPL 2020, check out the IPL Schedule for 2020 and Indian Premier League (IPL) Cricket live score . Like us on Facebook or follow us on Twitter for more sports updates. You can also download the NDTV Cricket app for Android or iOS.