India vs South Africa: Virat Kohli Reveals One Thing Mohammed Shami Does Better Than Everyone Else

India vs South Africa: Virat Kohli also said that Mohammed Shami doesn't need to be pushed any more as he understands the situation and is ready to deliver every time he's given the ball. 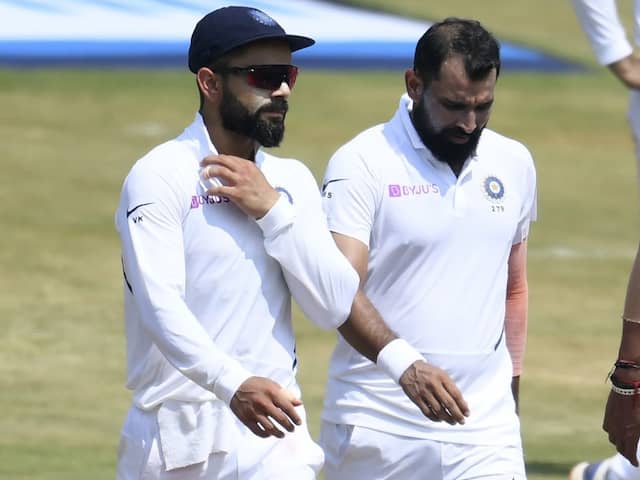 Virat Kohli heaped praise on fast bowler Mohammed Shami. Addressing the media on the eve of the second Test match against South Africa, Virat Kohli revealed what sets Mohammed Shami apart from other pacers in the Indian conditions. Kohli also said that Shami doesn't need to be pushed any more as "he understands the situation when he's given the ball". Asked why Kuldeep Yadav is not in the playing XI even after doing quite well when he last played a Test match, Kohli said that in home conditions Ravichandran Ashwin and Ravindra Jadeja are India's top choices as they give the team "so much more with the bat as well".

"Now, he (Shami) is taking the responsibility. We don't need to push Shami anymore. We don't need to tell him ''come on, you need to bowl this spell for us''. He wants the ball, he understands the situation when he's given the ball," Kohli said, heaping praise on Shami.

"I think on the pitches we play, I don't see anyone with so much seam movement apart from him (Shami)," the skipper said.

"He is someone who can change the complexion of the match totally when you don't see it coming. His skill is obviously there for everyone to see. Especially, in the second innings, when the situations are difficult he comes in and does the job every time. It's great," said Kohli.

Kohli said that each and every player puts the team first before themselves. He also added that Kuldeep Yadav understands why he is not in the playing XI.

"No one is self-centered and everyone is thinking about what I can do for the team. It's the same about Kuldeep. He understands that in India, Ashwin and Jadeja will be our first choices because they give us so much more with the bat as well," Kohli added.

While the Indian team management has received a lot of flak for not sticking to a specific team combination, Kohli was of the opinion that whatever is done is to win games for the country.

Kohli backed his words by pointing out that results are there for everyone to see as India have "the least losing percentage in the last three years".

"Lot has been spoken and said about the system that we have followed over the last two years. The only thing that matters to us is wanting to win as many games as we can and have been able to do that," said Kohli.

"We have the least losing percentage in the last three years and there is a good reason for that. We obviously are flexible but as I said it can't be possible if the team doesn't buy into it. The guys have bought into it," said Kohli, who has lost only one Test (vs Australia at Pune in 2017) at home as the Indian captain.

The second Test of the series will be played at Maharashtra Cricket Association Stadium in Pune, starting Thursday.

Kuldeep Yadav India vs South Africa, 2nd Test
Get the latest Cricket news, check out the India cricket schedule, Cricket live score . Like us on Facebook or follow us on Twitter for more sports updates. You can also download the NDTV Cricket app for Android or iOS.