Marcus Stoinis entertained the Melbourne crowd with his batting blitz as he notched up the highest-ever Big Bash League (BBL) score. 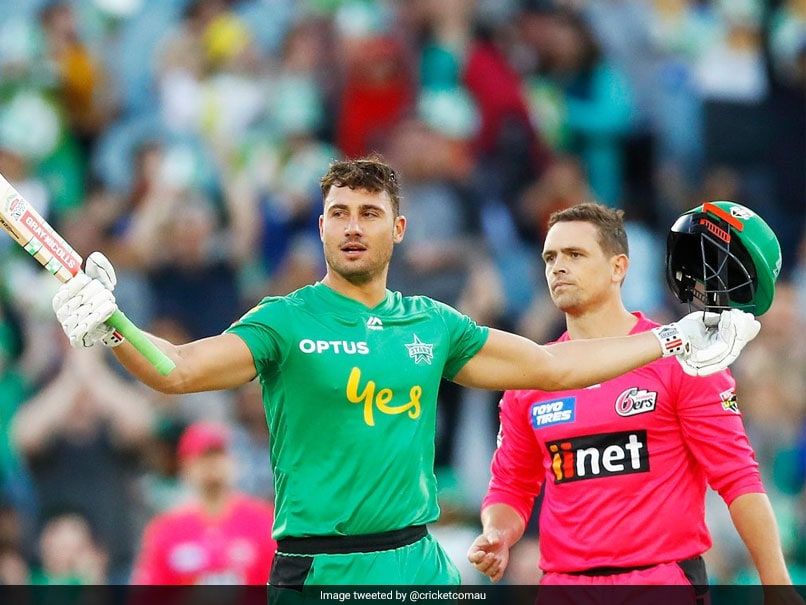 Marcus Stoinis smashed his way to a record-breaking 147 off 79 deliveries.© Twitter

Marcus Stoinis, who opened the innings for Melbourne Stars, notched up the highest-ever Big Bash League (BBL) score during his knock of 147 not out off just 79 balls against Sydney Sixers on Sunday. Marcus Stoinis sailed past D'Arcy Short, who had held the previous high score of 69-ball 122 in 2018, to claim the record. Marcus Stoinis, who was roped in by Delhi Capitals at the Indian Premier League auction, entertained the Melbourne crowd with his batting blitz in an innings that included eight sixes and 13 fours at the Melbourne Cricket Ground. Stoinis also stitched together the highest partnership for any wicket in BBL history along with his opening partner Hilton Cartwright. The duo put on a 207-run stand for the first wicket.

The Delhi Capitals took to Twitter to appreciate their new recruit's heroics with the bat and termed his knock as "absolutely outrageous".

"ABSOLUTELY OUTRAGEOUS! @MStoinis finishes with an unbeaten 147 off 79 balls, the highest ever individual score in @BBL history," Delhi Capitals tweeted.

ABSOLUTELY OUTRAGEOUS! @MStoinis finishes with an unbeaten off balls, the highest ever individual score in @BBL history #BBL09 #ThisIsNewDelhi #DelhiCapitals

In the match, after being put into bat by Sydney Sixers' captain Moises Henriques, Stoinis and Hilton Cartwright took their time initially and were 49 for no loss after the first seven overs.

In the latter half of the innings, both the batsmen thrashed Sixers' bowlers all over the ground to help Melbourne Stars to an imposing total of 219 for one in their allotted 20 overs.

In reply, Sydney Sixers were off to a poor start as Daniel Worrall removed Josh Philippe in the first over. Ben Dwarshuis top scored with an unbeaten 17-ball 42 but with the lack of support from the other batsmen, Sydney Sixers fell short of the target by 44 runs.

Melbourne Cricket Ground
Get the latest updates on India vs Australia and check out  Schedule, Results and Live Score. Like us on Facebook or follow us on Twitter for more sports updates. You can also download the NDTV Cricket app for Android or iOS.