Sachin Tendulkar went to vote in Mumbai along with his wife Anjali Tendulkar, daughter Sara Tendulkar and son Arjun Tendulkar. 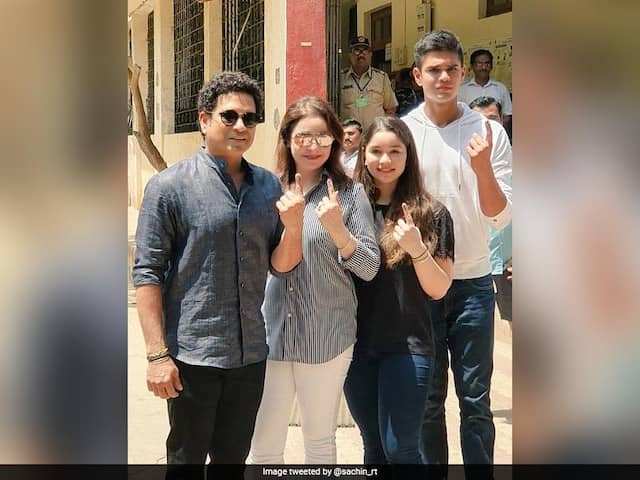 Election Day was a family affair for cricketing great Sachin Tendulkar who went to vote in Mumbai along with his wife Anjali Tendulkar, daughter Sara Tendulkar and son Arjun Tendulkar. Both the Tendulkar children were first-time voters who participated in the Lok Sabha elections this time.

The family obliged photographers outside the polling station in Bandra, posing with broad smiles and inked index fingers held out.

"I think that every citizen should come out and vote. It is very important for our country. This is first voting opportunity for Sara and Arjun, so I brought them along," Sachin Tendulkar said.

Voting this year has been so much more special with Sara and Arjun voting for the first time.
I urge you all to go out and VOTE too!#LokSabhaElections#GotInked@ECISVEEP pic.twitter.com/stUpabsZsg

The six Lok Sabha seats in Mumbai are voting along with 11 others in Maharashtra in the fourth round of polling for the seven-phase general elections that end on May 19. Results are due by May 23. An average 31.74 per cent voter turnout was recorded till 1 pm in the state till 1 pm.

There are several high-profile contenders in business and entertainment capital this time including actress Urmila Mantondkar who is the Congress candidate from the Mumbai North seat.

The Congress and its ally, Sharad Pawar's Nationalist Congress party or the NCP, are trying to wrest the six seats from the BJP-Shiv Sena combine. Last time, the Sena won three seats and the BJP three.