Bill Dean, the 80-year-old Australian cricket fan, thanked Justin Langer for his gesture, saying: "You have put years on my life". 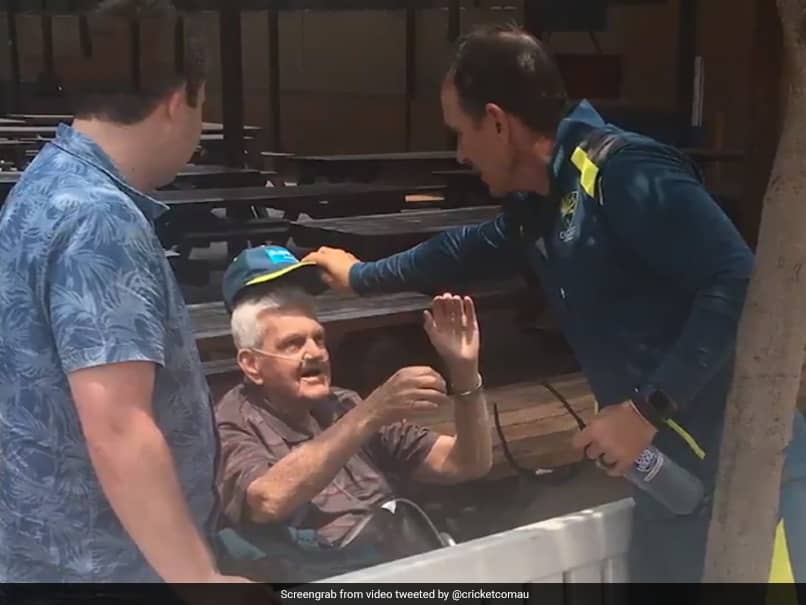 Cricket Australia on Wednesday shared a touching moment between Australian coach Justin Langer and an elderly wheelchair-bound fan at the Sydney Cricket Ground. Cricket Australia said that the fan's name is Bill Dean and he says in the video that he is 80 years old. CA said that Dean is a victim of the bushfires that have been raging across the Australian sate of New South Wales since Monday and has claimed seven lives and destroyed 200 homes. "Like many Australians, Bill Dean's been doing it tough lately. His home town of Lithgow has been struck by bushfires and his son-in-law's house was nearly lost."

A touching moment between Australia coach Justin Langer and a fan two days out from the Sydney Test. #AUSvNZ pic.twitter.com/7jcjX8vS5z

"Bill wasn't going to watch our Aussies train today because the smoky air was rough on his emphysema. But he made it to the SCG - and shared a special moment with coach Justin Langer," CA said in their caption to the video.

Dean thanked Langer in the video, saying "Justin, thank you very much. You have put years on my life."

Langer gave Bill his training cap. "It's not unusual if you can put a smile on the faces of any Australians whether they're kids or Bill who says he is 80 years old. That's one of the privileges of this job, you get to put a smile on people's faces," he told reporters in a press conference later in the day.

Australia are set to play New Zealand in the third Test in Sydney. The match is scheduled to start on Friday but there are questions being raised owing to the poor air quality in the city. Langer said that he hopes it rains during the match because the city needs it.

"There's not much we can do. Obviously there will be a lot of people that keep on top of it. But the reality is, this is a game of cricket," Langer said.

"In our game it's an important game of cricket, it's a Test match, but in terms of what's happening around Australia I mean it's stupid - it'll be the first time I ever say this in my life - I hope it rains a bit during the Test match because actually Sydney needs it," he said.

"I hope it rains at night so we can keep playing cricket, but Sydney, like lots of parts of Australia, needs the rain, doesn't it? We'll keep an eye on it. We'll get on and do it as well as we can," he added.

Sydney Cricket Ground (SCG), Sydney
Get the latest updates on IPL 2020, check out the IPL Schedule for 2020 and Indian Premier League (IPL) Cricket live score . Like us on Facebook or follow us on Twitter for more sports updates. You can also download the NDTV Cricket app for Android or iOS.