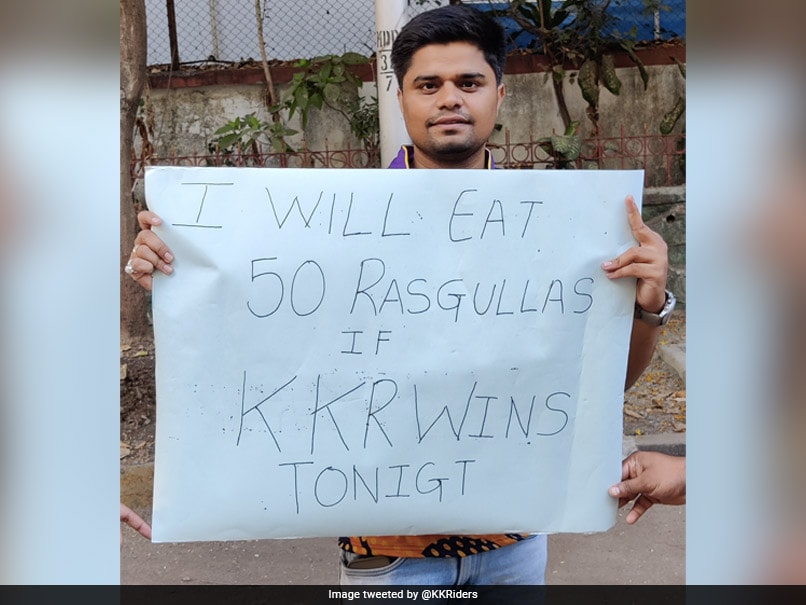 KKR fan holding the banner with a sweet message.

Fans were praying for KKR's victory, but a banner displayed by one of them caught the team's attention. KKR posted the photo on its official Twitter handle, making is viral.

"So Sweet," KKR captioned the photo of the fan who is seen holding a banner that says 'I will eat 50 Rasgullas if KKR wins tonight'.

The Twitter universe quickly reacted, with comments wishing the unidentified fan "best of luck". "Watch out what you say my friend," said a user. Others jokingly said the man will develop diabetes.

Kolkata Knight Riders won the match by seven wickets with five balls left to spare while chasing a target of 152. The team's fans posted congratulatory messages, saying this is an Eid gift.

“Thank you team for Eid ka Tohfaa,” one user said in his tweet.

Others exchanged Eid wishes in the comment section too.

Last month, a woman was seen holding banner during a match of Royal Challengers Bangalore (RCB) with Chennai Super Kings (CSK) with the message 'Not getting married till RCB wins IPL trophy' going viral on social media.

Similarly, a man was seen holding a banner which said 'If Hardik hits 50, I'll resign from my job' during a match with Sunrisers Hyderabad (SRH) and Gujarat Titans (GT).

The messages displayed by spectators at sporting events are known to become viral for their quirky tone. Some even come prepared with strange signs in order to attract attention.

Rajasthan Royals IPL 2022 Cricket
Get the latest updates on Fifa Worldcup 2022 and check out  Fifa World Cup Schedule, Stats and Live Cricket Score. Like us on Facebook or follow us on Twitter for more sports updates. You can also download the NDTV Cricket app for Android or iOS.