Smriti Mandhana on Tuesday scored a blistering half-century, her 10th consecutive in a run chase, as India Women registered a comprehensive nine-wicket victory over South Africa Women in the second ODI to level the five-match series at 1-1. 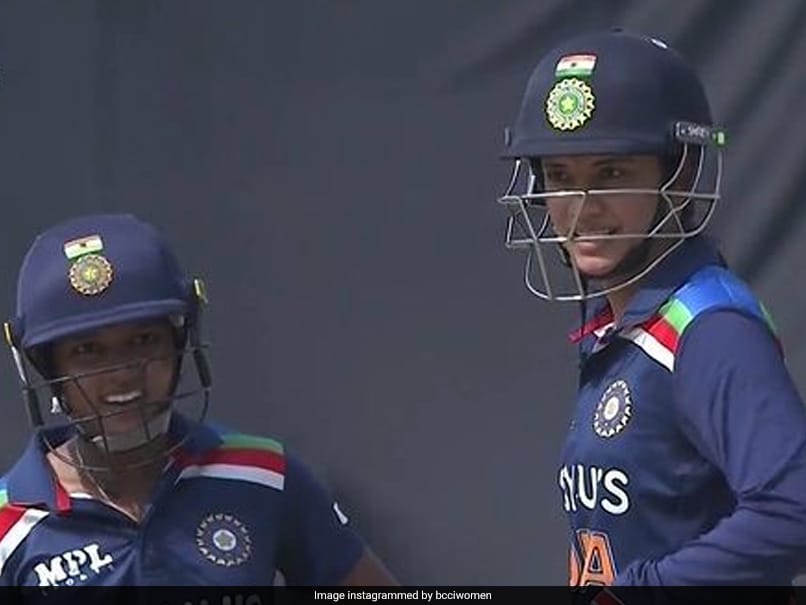 Smriti Mandhana blasted 80 runs off 64 balls, with the help of 10 fours and three sixes.© bcciwomen/Instagram

Indian women's cricket team opener Smriti Mandhana on Tuesday scored a blistering half-century as the hosts registered a comprehensive nine-wicket victory over South Africa in the second ODI to level the five-match series at 1-1. The left-handed batter also became the first-ever cricketer, male or female, to smash 10 consecutive scores of 50 or more in ODIs during the run chases. She surpassed New Zealand's Suzie Bates who had nine successive scores of 50 and more in run chases between 2015 and 2017. No other male or female cricketer has scored more than six 50-plus scores in consecutive ODI chases.

Chasing a modest 158 to win, Mandhana lost her opening partner Jemimah Rodrigues early but that didn't keep her from taking the attack to the South African bowlers. She blasted 80 runs off 64 balls, with the help of 10 fours and three sixes. She finished the match in style by hitting Nadine de Klerk for two consecutive boundaries in the 29th over.

Punam Raut, who came into bat at number three, started off slowly and scored just six runs off her first 30 balls. However, she soon changed gears and finished on 62 not out off 89 balls as India rode home.

South Africa skipper Sune Luus combined with Lara Goodall and kept Indian bowlers at bay, adding 60 runs for the third wicket. Mansi Joshi got Luus caught behind stumps on 36 to break the partnership. Goodall was cleaned up by India vice-captain Harmanpreet Kaurwith the batter just one short of her fifty.

After two quick wickets, South Africa's batting crumbled like a pack of cards and they folded for a paltry 157 in 41 overs. Jhulan was the pick of the bowlers with four wickets, while Rajeshwari Gayakwad and Mansi Joshi took three and two wickets respectively.

With series level at 1-1, the third ODI will be played on March 12 in Lucknow.

South Africa Women Smriti Mandhana Jhulan Goswami Cricket Mansi Joshi Sune Luus
Get the latest updates on Fifa Worldcup 2022 and check out  Fifa World Cup Schedule, Stats and Live Cricket Score. Like us on Facebook or follow us on Twitter for more sports updates. You can also download the NDTV Cricket app for Android or iOS.