India Women vs South Africa Women, 1st ODI: In what was their first match in 12 months due to the coronavirus pandemic, India crashed to a defeat against South Africa, in Lucknow. 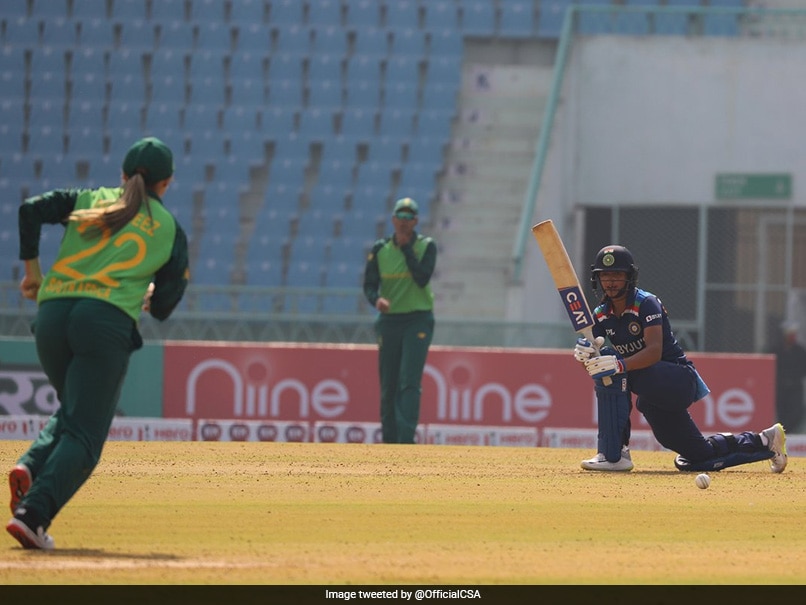 India Women vs South Africa Women: Both countries are facing each other in a five-match series.© Twitter

Lizelle Lee and Laura Wolvaardt shared the highest opening wicket stand against an under-prepared India to give South Africa an emphatic eight-wicket win in the first ODI of the five-match series, on Sunday. Asked to bat, India never got the momentum it needed and could only manage 177 for nine despite a fifty from skipper Mithali Raj (50 off 85) and a quick-fire 40 off 41 balls from her deputy Harmanpreet Kaur. Lee (83 not out off 122). Wolvaardt (80 off 110) helped South Africa chased down the target in 40.1 overs with a record 169-run stand.

India would quickly like to forget their first outing in 12 months and come back much stronger in the next game against a side that has come into the series with substantial game time.

The South African opening duo did not look in any sort of trouble against the Indian pacers as well as their highly-rated spinners. Lee smashed 11 fours and a six while Wolvaardt collected 12 boundaries.

Veteran India pacer Jhulan Goswami (2/38), playing her first game since November 2019, was the most impressive in an otherwise disappointing bowling effort. Debutant pacer Monica Patel got only four overs in which she conceded 20 runs.

The spin-bowling trio of Rajeshwari Gaekwaid, Deepti Sharma and Poonam Yadav failed to provide any breakthroughs that were needed to keep India in the game.

Earlier, the 62-run stand between Raj and Kaur steadied the innings after India lost their first three wickets for 40 runs, including star opener Smriti Mandhana (14 off 20), who looked in sublime touch during her short stay.

Harmanpreet, playing her 100th ODI, looked ominous but played one big shot too many to be caught at long off. She smashed six boundaries in her entertaining knock. Raj, who took some time to get going in her first game since November 2019, then shared a 52-run partnership with Deepti Sharma (27 off 46) to keep the innings moving. But her dismissal off a full-toss triggered a collapse that saw India reeling at 160 for eight from 154 for four. The skipper's innings comprised four boundaries and a six.

Senior South Africa pacer Shabnim Ismail was the pick of the bowlers, taking three wickets for 28 runs in 10 overs.

Indian players did not get to play in the last 12 months due to the COVID-19 pandemic while South Africa recently beat Pakistan 3-0 at home.

South Africa Women Harmanpreet Kaur Mithali Raj Cricket
Get the latest updates on ICC Women's Cricket World Cup 2022 and IPL 2022, check out the Schedule , Live Score and IPL Points Table. Like us on Facebook or follow us on Twitter for more sports updates. You can also download the NDTV Cricket app for Android or iOS.