Former Pakistan Captain Shahid Afridi Trolls Himself At An Event, Jokes About His Batting

Former Pakistan captain Shahid Afridi recently joked about his batting in an event. 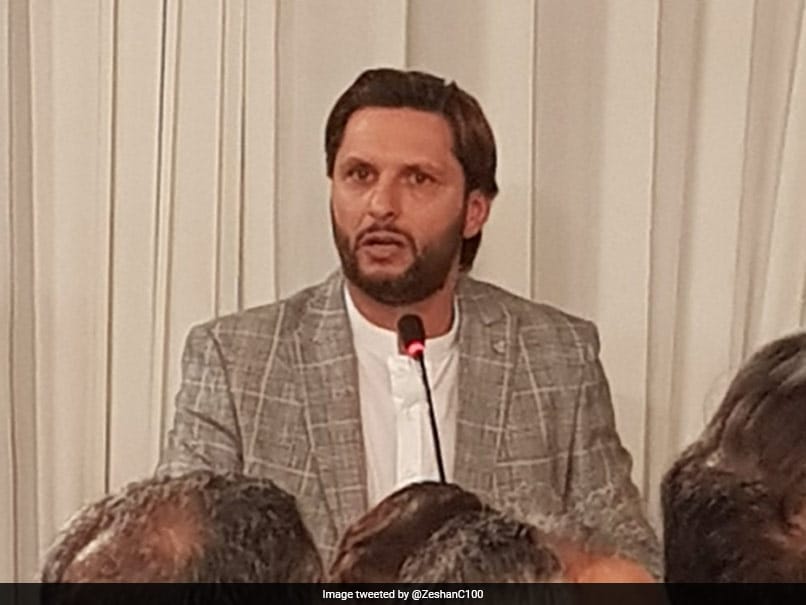 Shahid Afridi at an event joking about his batting© Twitter

Former Pakistan captain Shahid Afridi ranks among the most popular cricketers in the world. The maverick all-rounder enjoys a huge fan following mainly because of the entertainment he guarantees on a cricket field. In the early part of his career, Afridi captured the public imagination with his explosive batting. He set and shattered several records batting as an opener, at the time the most destructive in the world. Over the years, he transformed into a quality leg-spinner and endured a severe decline in his batting prowess. Despite boasting of serious batting talent, Afridi's repeated failures with the willow frustrated his fans and teammates. Though he played some memorable knocks, Afridi was never really consistent with the bat. On most occasions he would last only a few balls, often ending up being lampooned by cricket fans. Afridi, now retired, carried forward that joke when he made an appearance at a public function. "Just like my batting I won't take up much of your time," he said as he commenced his address to draw laughter from the audience.

Shahid Afridi to the audience at a recent event "Assalamualaikum, just like my batting I won't take up much of your time" pic.twitter.com/H6L0dNd2Ek

Hahaha. Such a star

ROFL such a star across border...??

Afridi's self-deprecating humour was appreciated by cricket lovers in India.

Really pleased that PCB- ICC have joined hands to bring cricket back home to Pak. Would 've been great to see some Indian players too

Afridi may not have enjoyed a lot of success against India in recent years, but Indian fans have always admired his ability to change the course of matches with a stroke of genius. Earlier, Afridi had tweeted about his desire of wanting Indian players to be part of the World XI team that played 3 T20Is against Pakistan.

Comments
Topics mentioned in this article
Pakistan Cricket Team Shahid Afridi Cricket
Get the latest updates on India vs Australia Series, check out the India vs Australia Schedule for 2020-21 and Ind vs Aus live score . Like us on Facebook or follow us on Twitter for more sports updates. You can also download the NDTV Cricket app for Android or iOS.