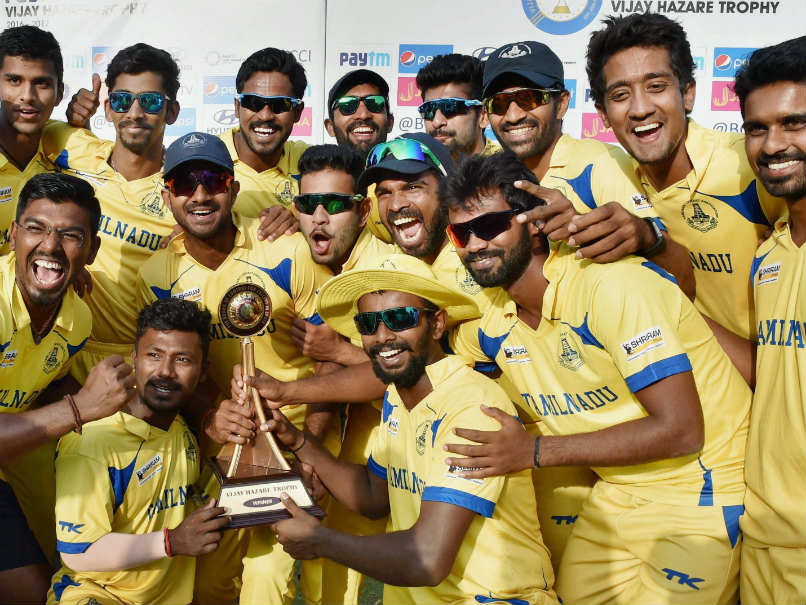 Dinesh Karthik produced an innings of character before Tamil Nadu's disciplined bowling effort saw them beat Bengal by 37 runs in the Vijay Hazare Trophy final on Monday. This was the third time that Tamil Nadu prevailed over Bengal in the national One-Day meet having beaten them in 2008-09 and 2009-10. Karthik (112) was the only significant scorer for Tamil Nadu en route to their meagre total of 217 in 47.2 overs as Mohammed Shami bowled with a lot of fire, scalping 4 for 26. Ashok Dinda (3/36) also rattled the top order. But Tamil Nadu bowlers showed unbelievable discipline, restricting Bengal to 180 on a pitch that didn't have any demons.

Off-spinner MS Washington Sundar (0/17) didn't get any wickets but kept the Bengal batsmen on tenterhooks in his eight-over spell.

Rahil Shah, Aswin Crist and M Mohammed all did what was required to defend a small total.

Trying to be extra cautious, Shreevats Goswami (23) consumed a lot of deliveries at the onset, increasing the pressure. A poor call led to Abhimanyu Easwaran (1) getting run out.

Manoj Tiwary (32) was bowled by opposite number Vijay Shankar, trying to play a pull shot but the ball seemed to keep a bit low.

Sudeep Chatterjee (58) and Anushtup Majumdar (24) added 65 runs for the fifth wicket for Bengal but a dodgy leg before off Baba Aparajith started another collapse.

Chatterjee then played an atrocious sweep shot to get bowled round the legs off left-arm spinner Sai Kishore as Bengal's hopes ended.

Earlier, Karthik hit 14 boundaries to score more than 50 percent of Tamil Nadu's runs despite a good effort by Bengal bowlers.

The former India wicketkeeper played shots all around the wicket playing the drives and pulls with equal ease. He lost partners at the other end but never stopped attacking as 91 runs from 20 overs bowled by Amir Gani (0/42 in 10 overs) and Pragyan Ojha (0/49 in 10 overs) proved crucial.

Comments
Topics mentioned in this article
Dinesh Karthik Mohammed Shami Ashok Dinda Manoj Tiwary Shreevats Goswami Cricket
Get the latest updates on ICC Women's Cricket World Cup 2022 and IPL 2022, check out the Schedule , Live Score and IPL Points Table. Like us on Facebook or follow us on Twitter for more sports updates. You can also download the NDTV Cricket app for Android or iOS.