Thanks to centuries from Abhimanyu Easwaran (101) and Shreevats Goswami (101) and a blistering 75 from Manoj Tiwary, Bengal posted an imposing score of 329 for four in their 50 overs. In reply, Jharkhand were bowled out for 288. 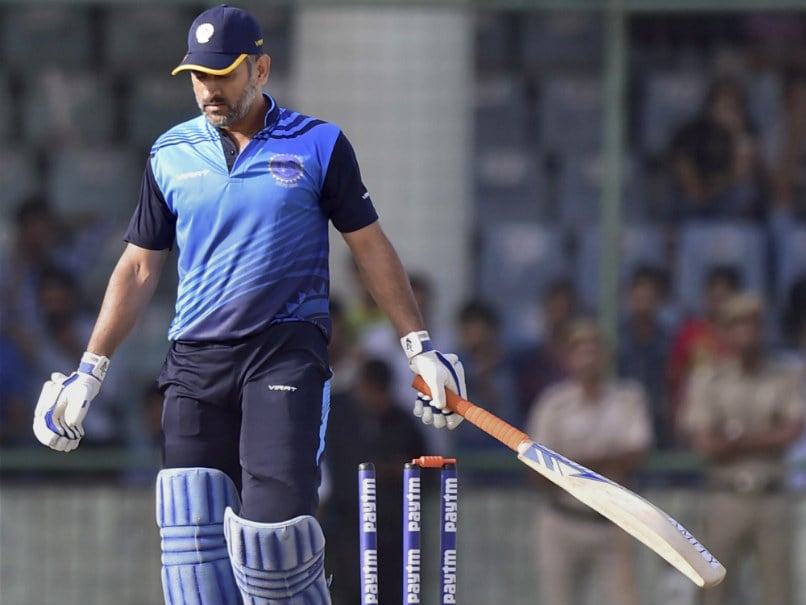 MS Dhoni smashed 70 off 62 balls but failed to get Jharkhand over the line.© PTI

Former India captain Mahendra Singh Dhoni enthralled fans by showcasing his big hitting prowess but failed to save Jharkhand from going down to Bengal in the Vijay Hazare semi-final on Saturday. A young Bengal side led by Manoj Tiwary beat Jharkhand by 41 runs to set up a final clash against Tamil Nadu. Bengal will be wary of Dinesh Karthik and Co. having lost to them previously in two successive finals in 2008-09 and 2009-10. However, Tiwary's team will be buoyed by their batting performance against Jharkhand and will for a similar showing against Tamil Nadu.

Thanks to centuries from Abhimanyu Easwaran (101) and Shreevats Goswami (101) and a blistering 75 from Manoj Tiwary, Bengal posted an imposing score of 329 for four in their 50 overs.

Varun Aaron took two wickets but gave away 89 runs off his 10 overs. Monu Kumar was the pick of the Jharkhand bowlers giving away just 40 runs from his 10 overs and accounting for the wicket of the dangerous Goswami.

The fifth wicket partnership of 97 runs between Dhoni and Ishank Jaggi (59) put Jharkhand well and truly on their way but it all came crashing down after the departure of Dhoni and then Jaggi.

Dhoni took the attack to the Bengal bowlers, hitting 70 off 62 balls, before Jharkhand were bundled out for 288 in 50 overs.

The four sixes were vintage Dhoni and the 2000-odd spectators who had come to watch him in action were not disappointed. They were ecstatic when Ashoke Dinda dropped a sitter at long-off that trickled down to the boundary.

The hapless off-spinner Amir Gani watched in disbelief as Dhoni then hit him for two sixes over long-on -- the second one went 100 metres.

The pressure of scoreboard was telling but that didn't deter Dhoni from sending a Pragyan Ojha delivery into the second tier at the Ambedkar Stadium end.

Ojha (5/71) has lost some zip after a remodelled action and kept on bowling short and was repeatedly punished by Dhoni and Jaggi.

However, Ojha bowled the most important delivery of his entire stint with Bengal as he got one to turn away from Dhoni, clipping the off stump bail.

Comments
Topics mentioned in this article
MS Dhoni Shreevats Goswami Pragyan Ojha Manoj Tiwary Ishank Jaggi Saurabh Tiwary Cricket
Get the latest updates on IPL Auction 2023 and check out  IPL 2023 and Live Cricket Score. Like us on Facebook or follow us on Twitter for more sports updates. You can also download the NDTV Cricket app for Android or iOS.