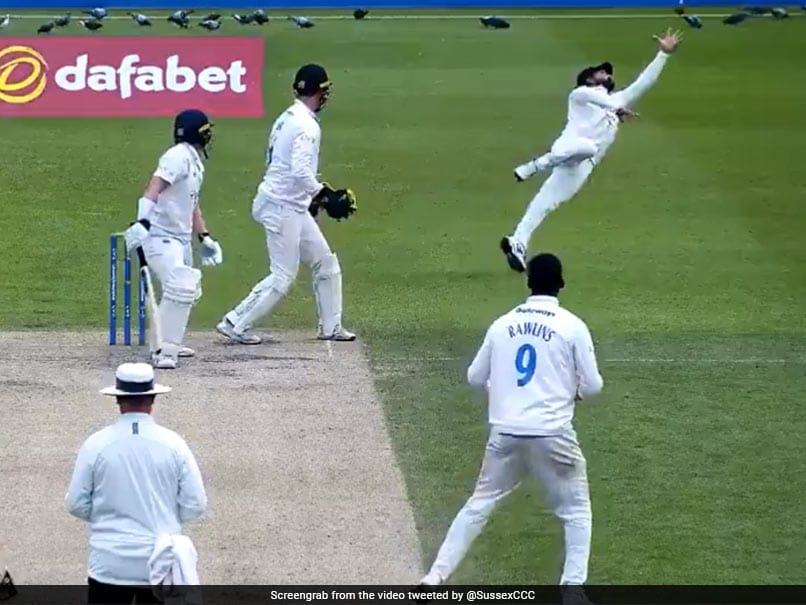 Mohammad Rizwan did it all against Durham while playing for Sussex in the ongoing County Championship Division 2. The Pakistan wicketkeeper first played a knock of 79 in the first innings and then bowled a couple of overs as well for Sussex. To cap it all off, the 29-year-old took a stunning catch in Durham's second innings and this effort helped the side dismiss David Bedingham.

On the third delivery of the 103rd over, Bedingham played a forward defence off the bowling of Delray Rawlins, but the ball managed to catch an outside edge and hit the wicketkeeper's pads and popped up in the air.

Standing at first slip, Rizwan then dived towards his right and he held onto the ball to take a stunning catch.

In the second innings, Rizwan bowled a couple of overs as well. Bowling medium pace, he conceded just five runs and, in the end, the match between Durham and Sussex ended in a draw.

In the game, Durham posted just 223 batting first as Aaron Beard and Tom Clark returned with three wickets each for Sussex.

Cheteshwar Pujara then scored 203 as Sussex posted 238, gaining a lead of 315 runs. This was Pujara's third consecutive ton in the ongoing County Championship.

Durham openers Alex Lees and Sean Dickson then scored centuries in the second innings and Durham declared their innings at 364/3. In the end, the match ended in a draw. Sussex are currently at the second last position in Division 2 with 31 points from four matches, 42 points behind table-toppers Nottinghamshire.

Pakistan Cricket Team Mohammad Rizwan Cricket
Get the latest updates on Fifa Worldcup 2022 and check out  Fifa World Cup Schedule, Stats and Live Cricket Score. Like us on Facebook or follow us on Twitter for more sports updates. You can also download the NDTV Cricket app for Android or iOS.