Chris Gayle was unbeaten on 122 runs off 54 deliveries, with his knock laced with seven fours and 12 sixes. 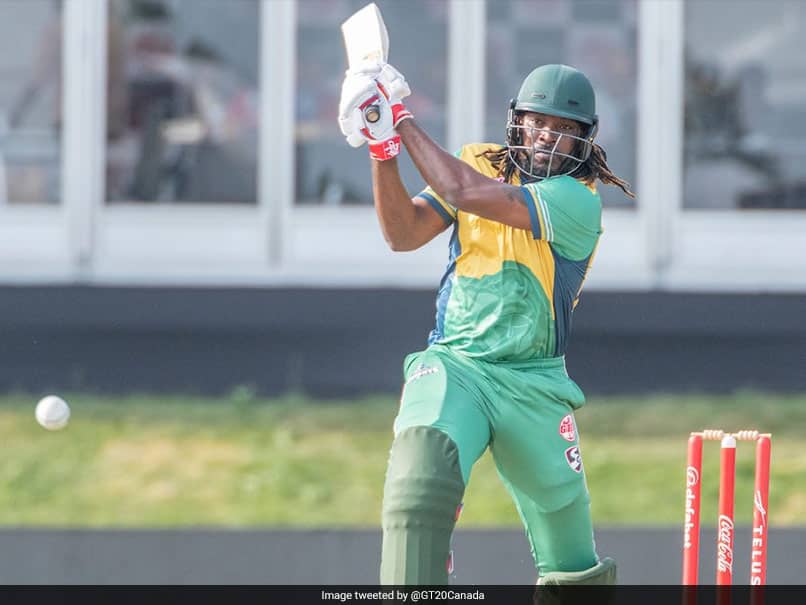 Chris Gayle, who had a very indifferent World Cup 2019, made light work of the bowlers by hitting them to all parts of the ground during a match between Vancouver Knights and Montreal Tigers in the Global T20 Canada League. Gayle was unbeaten on 122 runs in just 54 deliveries, with his knock studded with seven fours and 12 sixes. Gayle's knock helped Vancouver Knights post a mammoth total of 276/3 on board -- the second highest ever team total in T20 cricket. Gayle's opening partner Tobais Visee also scored a quick-fire 51 runs from 19 balls.

South Africa's Rassie Van der Dussen also joined the party and smashed 56 off 26 balls. Unfortunately for them, the match couldn't yield a result as it was abandoned due to bad weather.

Gayle's power-hitting not only entertained the fans present at the ground but also took the Twitter by storm.

The lightning and thunderstorms must have come off Gayle's bat.

However, Gayle was not satisfied with his power-packed knock as he was aiming to create history by becoming the first man ever to score a double-century in the shortest format of the game.

200 on @henrygayle's mind? Who all want to see that happen in #GT2019? pic.twitter.com/BhuRtcHgHo

Speaking after his innings, he said, "I'm not feeling any sweat. It's cool conditions. To get a hundred and to post 200 on the board, I'm happy with that. Can't be too safe here in Toronto because it's a good wicket, small ground as well. So, we have to start well. I wanted 200 personally, but that didn't happen in this game. Overcast conditions, so hopefully get a good bowl in and get the two points, but it won't be easy."

Gayle had announced that he will retire from the international cricket after the World Cup 2019 but then had a change of mind and will continue playing.

"They want me out of the game, that's unfortunate (laughs). I'll be around," Gayle said jokingly.

He will don the West Indies colours during the three-match One Day Internationals series against India.

Rassie van der Dussen
Get the latest updates on IPL 2021, IPL Points Table , IPL Schedule 2021 , live score . Like us on Facebook or follow us on Twitter for more sports updates. You can also download the NDTV Cricket app for Android or iOS.