"Can You Believe It?" New Zealand Made To Pay For Todd Astle's Massive Blunder. Watch Video

New Zealand didn't do themselves any favours as Australia piled on the misery on Day 4 of the third and final Test. 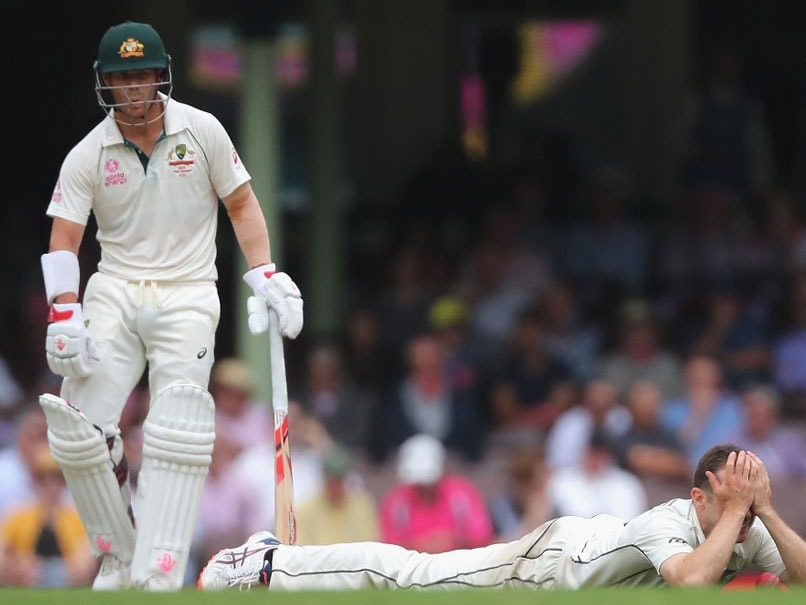 Todd Astle put down the simplest of return catches to give Marnus Labuschagne a reprieve.© AFP

Australia piled more misery on the visiting New Zealand team on Day 4 with David Warner smashing his 24th hundred in Test cricket and Marnus Labuschagne notching up another half-century. The hosts declared their second innings at 217 for two on Monday, leaving New Zealand the improbable task of scoring 416 runs for victory in the third Test. Things, though, could have been a little different if Todd Astle had held on to the simplest of return catches but the New Zealand all-rounder put down the chance, giving Marnus Labuschagne a reprieve when he had only scored 4 runs.

Shane Warne and his fellow commentator just couldn't believe what they had seen.

"Oh dropped him, can u believe it?," said the former Australia leg-spinner.

"Well, as far as caught and bowls come, we saw Nathan Lyon drop a couple yesterday. This is as easy as they come," he added.

Here is the video of Todd Astle's massive blunder:

At tea, New Zealand were reeling at 27-4 and heading for another heavy defeat with Australian bowlers Mitchell Starc and Nathan Lyon among the wickets in the second innings on Monday.

Earlier, Warner completed his 24th Test century with a clip off his pads for three runs through mid-wicket and remained unbeaten when skipper Tim Paine declared upon the dismissal of Marnus Labuschagne.

There was drama late in the innings with the Australians chasing quick runs ahead of the declaration when Warner was given an official warning by umpire Aleem Dar for running down the middle of the pitch in scampering a single.

It resulted in five penalty runs being added to New Zealand's first innings total meaning their target was revised down from 421 to 416.

David Warner Australia vs New Zealand, 3rd Test Cricket
Get the latest updates on ICC T20 Worldcup 2022 and CWG 2022 check out the Schedule, Live Score and Medals Tally. Like us on Facebook or follow us on Twitter for more sports updates. You can also download the NDTV Cricket app for Android or iOS.