"For What": David Warner Left Fuming After Australia Get Five-Run Penalty. Watch Video

David Warner was left baffled by Aleem Dar's decision and was heard asking the umpire, "for what, what am I doing wrong?" 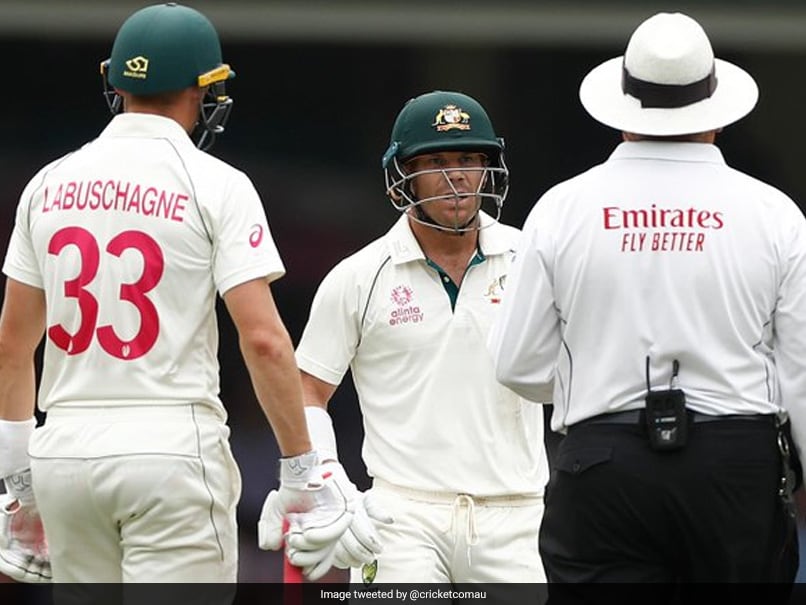 Australia are in total control of the ongoing third and final Test against New Zealand in Sydney. Day 4 of the match saw Australia extend their dominance thanks to a brilliant century from David Warner -- his 24th in Test cricket. Australia declared their second innings at 217 for two on Monday, leaving New Zealand the improbable task of scoring 416 runs for victory. At tea, the visitors had been reduced to 27 for four. Australia's near perfect day so far, though, had a small blip when they were given a five-run penalty by umpire Aleem Dar for "running in the 'danger zone' of the pitch".

Warner, who had already crossed the 100-run mark, was left baffled by Aleem Dar's decision and was heard asking the umpire: "For what. What am I doing wrong?"

Australia have been penalised five runs for running in the 'danger zone' of the pitch.#AUSvNZ | https://t.co/rx14Qs3S0i pic.twitter.com/sIEtazVcXl

According to cricket.com.au, Warner asked the other on-field umpire, Marias Erasmus "what do you want me to do, play the shot and jump this way?" as he motioned jumping sideways.

Former Australia fast bowler Brett Lee, who was on-air commentating for For Cricket, was also confused by Aleem Dar's decision.

"I think it's a fair point from David Warner," said Brett Lee.

"I don't think he could have veered off quicker than he did, given his momentum," O'Keeffe said.

Aleem Dar had first given an official warning to Marnus Labuschagne for running down the middle of the wicket. Two balls later, Dar deemed Warner had run on the danger zone while taking a quick single and gave the hosts the penalty.

The five runs were added to New Zealand's first innings, boosting it from 251 to 256 to leave the tourists needing 416 to win the third Test.

David Warner Marnus Labuschagne Australia vs New Zealand, 3rd Test Cricket
Get the latest updates on ICC T20 Worldcup 2022 and CWG 2022 check out the Schedule, Live Score and Medals Tally. Like us on Facebook or follow us on Twitter for more sports updates. You can also download the NDTV Cricket app for Android or iOS.