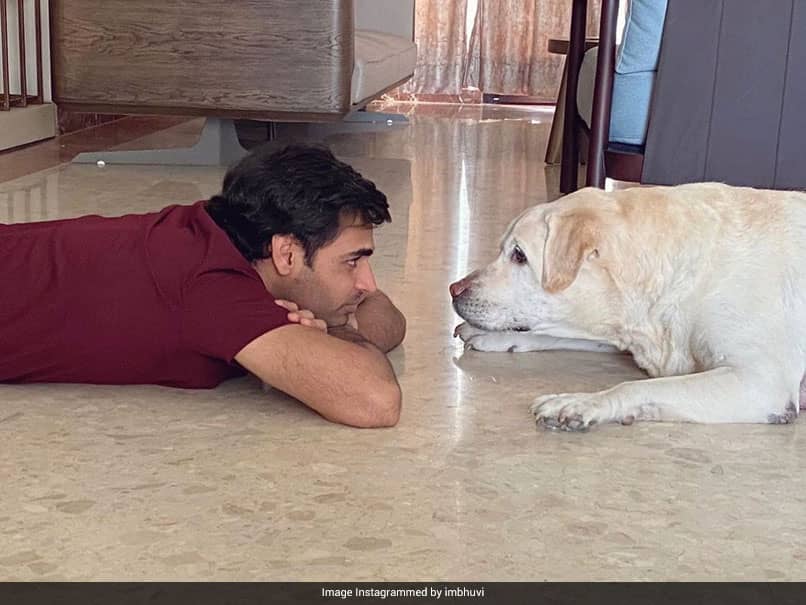 Bhuvneshwar Kumar, Indian fast bowler, on Friday posted a few pictures with his pet dog on Instagram, setting up friendship goals. Sharing the pictures, Bhuvneshwar Kumar expressed his love for his dog and even gave it a beautiful caption as he wrote: "Buddies THEN and NOW!! #dogsofinstagram #alexnagar #buddies #buddiesforlife #thenandnow". The two pictures, clicked at some year's gap, showed Bhuvneshwar and his dog striking the same pose -- lying flat on the ground, nose to nose. Bhuvneshwar's wife Nupur Nagar was among the first ones to comment on his post as she wrote: "My loves!!". She even went on to describe their dog's expression in one of the pictures. "Alex's expression in the 2nd pic "You know what bhuvi," she commented.

The post became an instant hit among his followers, receiving over 1 lakh likes in just one hour. The fans also bombarded the post with cute emojis.

With no cricketing action currently underway due to the coronavirus pandemic, Bhuvneshwar, like many, is spending time at home with his family.

For a professional athlete it is difficult to follow their normal workout routines when locked at home and the Indian fast bowler also spoke about the same while talking to Indian women's cricketers Jemimah Rodrigues and Smriti Mandhana in their chat show 'Double Trouble'.

"It has been difficult to work out at home as we are used to training at gyms or cricket grounds. But I am trying to make sure that I maintain some level of fitness so that I don't have to start from zero when I return to the field," said Bhuvneshwar, who is known for his ability to swing cricket ball both ways.

Bhuvneshwar Kumar Cricket
Get the latest updates on India vs England Series, India vs England , live score and IPL 2021 Auction . Like us on Facebook or follow us on Twitter for more sports updates. You can also download the NDTV Cricket app for Android or iOS.