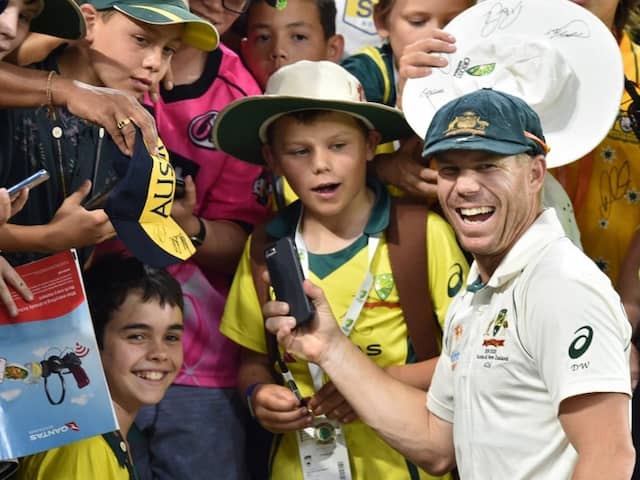 David Warner made a young fan's day with his grand gesture. (Image for representational use)© AFP

The ball-tampering scandal had hit Australian cricket hard but they have turned things around swiftly and look to be returning to their best. Australia have been nothing short of exceptional in the past few months, winning hearts of Aussie fans all over the globe with their on-field performances. Not just on the field, Australian cricketers seem to be doing the right things off the field as well. On Tuesday, a video started doing the rounds on Twitter where Australia opener David Warner can be doing some batting practice, and as the left-hander makes his way off the ground, he is seen handing his bat to a young fan in the crowd.

Cricket Australia chief Kevin Roberts posted the video on his official Twitter handle with the likes of Dean Jones reacting to it.

On Monday, Australia crushed New Zealand by 279 runs in the Sydney Test to claim a 3-0 series sweep.

Nathan Lyon finished with his second 5-wicket haul of the match.

Australia had scored 454 in their first innings, powered by Marnus Labuschagne's maiden Test double-century. Despite debutant Glenn Phillips' fighting fifty, a Lyon-inspired Australia skittled them out for 256.

David Warner then bagged his 24th Test century as Australia declared for 217/2. Lyon and Mitchell Starc took away any hopes New Zealand had of a positive result, as the visitors fell for a meek 136.

The win secured a perfect home summer for Australia, who won all the five Tests they played.

Australia have been unbeatable this season, winning all five Tests at home -- two against Pakistan and three against New Zealand -- after retaining the Ashes by drawing the series 2-2 in England.