Marnus Labuschagne reached his highest Test score of 215 as the Australians were dismissed just before tea on the second day of the third and final Test. 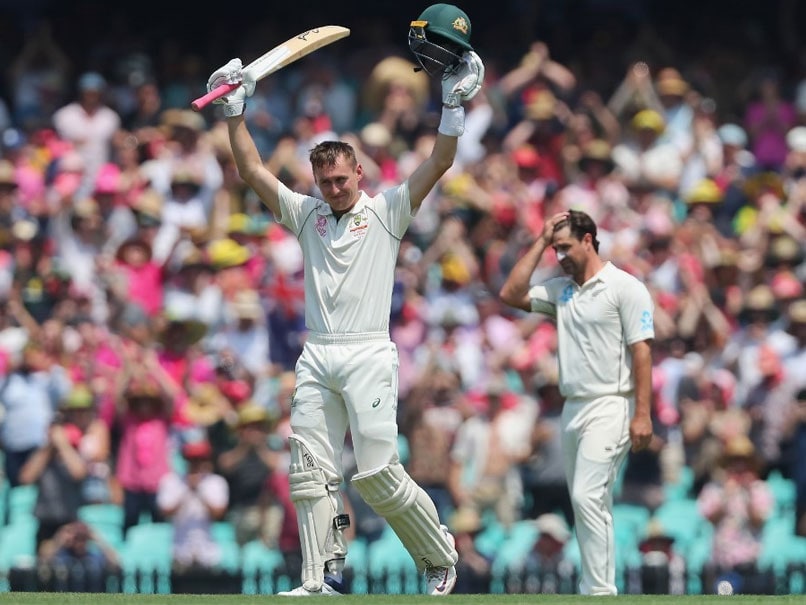 Marnus Labuschagne hit a double century as Australia amassed a huge 454 in the first innings.© AFP

Marnus Labuschagne hit a double century as Australia amassed a huge 454 in the first innings against a weary New Zealand in the third Sydney Test on Saturday. Marnus Labuschagne reached his highest Test score of 215 as the Australians were dismissed just before tea on the second day of the final Australia vs New Zealand Test. The rock-solid number three sweated on 199 for 20 minutes before he thick edged Colin de Grandhomme through the vacant slips to the ropes to bring up his double ton. The milestone came off 363 balls with 19 fours and a six and eclipsed his previous Test record of 185 against Pakistan in Brisbane last November.

Labuschagne was Test cricket's leading run-getter last year with 1,104 runs and is carrying on where he left off in 2019.

The Kiwis finally got him out when Labuschagne was caught and bowled by leg-spinner Todd Astle.

Skipper Tim Paine provided support for Labuschagne to reach his double century before he was bowled between his bat and pad by de Grandhomme for 35.

Paine faced 92 balls and shared in a 79-run stand with Labuschagne to take Australia beyond 400.

Wickets fell quickly just before tea with James Pattinson bowled by Neil Wagner for two, Pat Cummins caught off Astle's bowling for eight and Mitchell Starc hitting a breezy 22 off 21 balls before he was bowled by Wagner, who finished with three for 66.

The hosts lost two wickets on the second morning of the Test.

Matthew Wade was out in the day's first over, bowled off-stump while attempting to sweep off-spinner Will Somerville for no addition to his overnight score of 22.

The Kiwi bowlers had strangled his scoring shots and his 10 runs came off 42 balls.

Henry was bowling despite fracturing his left thumb on Friday. He had the injury strapped and placed in a splint to continue on playing.

The Sydney Test is being played against the backdrop of one of Australia's most devastating bushfire seasons with at least 20 people losing their lives in blazes raging across the country, including on the outskirts of Sydney.

Play will be suspended in the match at the umpire's discretion, should smoke significantly affect air quality or visibility, but the sky above the ground has remained clear so far.

Steven Smith Australia vs New Zealand, 3rd Test Cricket
Get the latest updates on T20 World Cup, check out the T20 World Cup Schedule and Live Score . Like us on Facebook or follow us on Twitter for more sports updates. You can also download the NDTV Cricket app for Android or iOS.