David Warner completed a sharp catch at leg-slip to break the 72-run stand between BJ Watling and Tom Blundell. 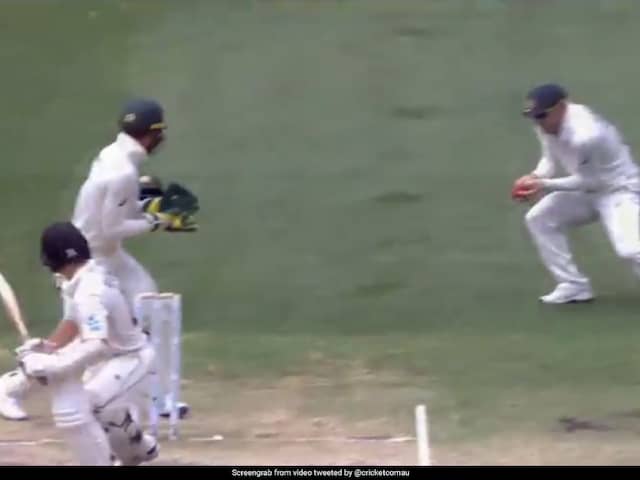 BJ Watling was dismissed for 22 by Nathan Lyon.© Twitter

Nathan Lyon struck in the 50th over to remove BJ Watling for 22 in the just-concluded second Test of the three-match series between Australia and New Zealand at the Melbourne Cricket Ground (MCG) on Sunday. BJ Watling played a forward defensive shot but the ball spun and took the inside edge and went straight into the hands of David Warner, stationed at leg-slip. The Australian opener completed a simple catch to put Australia on track of a big win. Cricket Australia took to Twitter to share the video of Watling's dismissal. "Bet you've never seen a dismissal like that, " the video was captioned.

Former Australia batsman Dean Jones came up with a funny response to Cricket Australia's tweet and compared the 34-year-old's dismissal to a "rocking horse poo".

"This dismissal is as rare as rocking horse poo," Dean Jones tweeted.

This dismissal is as rare as rocking horse poo! https://t.co/SZxz0DV9Vq

In the match, Australia declared their second innings at 168 for five on Day four, setting New Zealand a mammoth target of 488.

New Zealand's quest of a dream run-chase was off to a poor start as James Pattinson removed Tom Latham in the ninth over and followed up the good start by removing New Zealand skipper Kane Williamson for a duck.

BJ Watling then stitched a 72-run stand for the fifth wicket with opening batsman Tom Blundell but Nathan Lyon broke the stand by removing the Watling.

For New Zealand, Tom Blundell went onto to score his second Test hundred.

Nathan Lyon ended up taking four wickets as Australia thrashed New Zealand by 247 runs to win the second Test at Melbourne and the series on Sunday with Blundell's battling century proving futile.