The batsman could only offer a dead bat to Arjun Tendulkar's delivery as it ripped past him to hit the top of his off-stump. 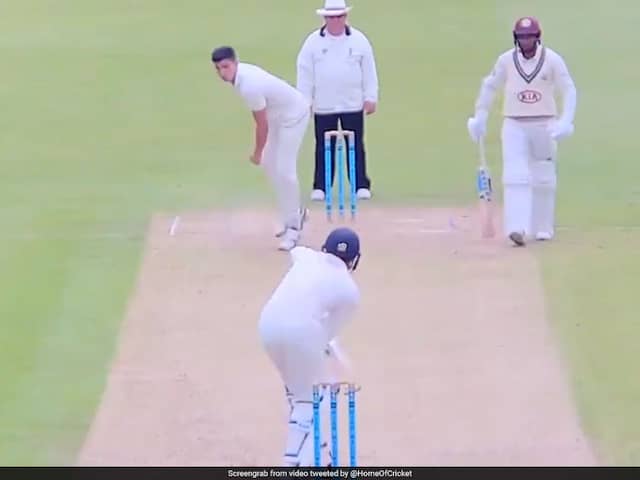 Arjun Tendulkar, who broke into the India U-19 squad last year, left a mark in the Second XI Championship after dismissing Surrey 2nd XI batsman Nathan Tilley with his raw pace on Monday. MCC Young Cricketers all-rounder Arjun Tendulkar, who is carrying the weight of his father's legacy, steamed in to hit the deck and produce a delivery which swung back to hit the right-handed opener's off-stump. Tilley, who was dismissed for four runs, could only offer a dead bat to the 19-year-old's delivery as it ripped past him to hit the top of his stump.

The dismissal was well documented on Lord's Cricket Ground's Twitter handle with a caption which said, "Arjun Tendulkar, take a bow!"

Arjun was also the pick of the bowlers for MCC Young Cricketers returning figures of 2/50. He also bowled two maidens and bowled 11 overs at an economy rate of 4.55.

However, the new-ball bowler also conceded four extras through no balls in his 11 overs.

Despite the valiant effort from Arjun, Surrey 2nd XI, went on to score 340/6 while MCC Young Cricketers currently trail by 227 runs with 4 wickets in hand.

Arjun had claimed his first wicket for India U-19 during the first Youth Test match against Sri Lanka U-19 team at the Nondescripts Cricket Club ground, Colombo in July 2018.

Arjun, whose father made his India debut at the age of 16 against Pakistan in 1989, needed only 12 balls to claim his first scalp for India U-19 team.

Comments
Topics mentioned in this article
Arjun Tendulkar Cricket
Get the latest updates on IPL 2020, check out the IPL Schedule for 2020 and Indian Premier League (IPL) Cricket live score . Like us on Facebook or follow us on Twitter for more sports updates. You can also download the NDTV Cricket app for Android or iOS.