Arjun Tendulkar spent some time with Team India head coach Ravi Shastri and got some valuable tips from him in London. 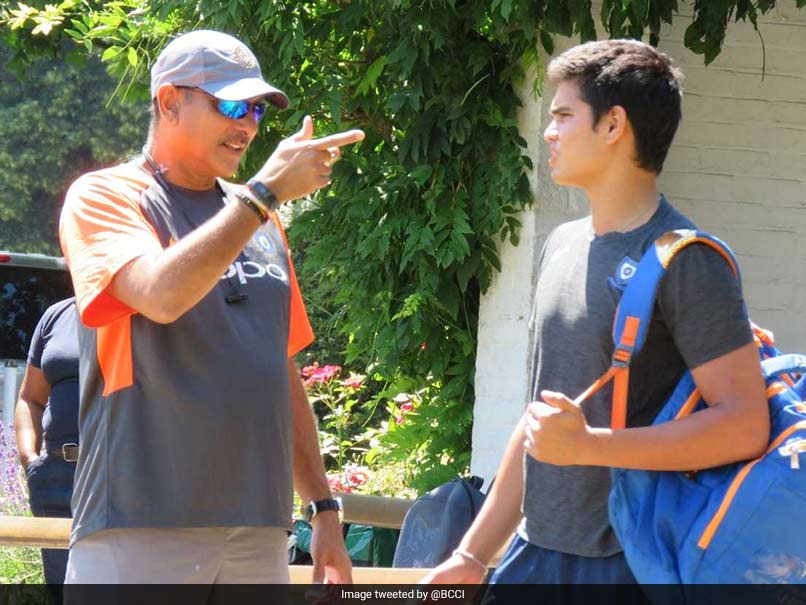 Arjun Tendulkar was selected in India's under-19 squad for the tour of Sri Lanka in July.© BCCI

India cricket legend Sachin Tendulkar's son Arjun Tendulkar spent some time with Team India head coach Ravi Shastriand got some valuable tips from him in London. Shastri was seen giving a pep talk to Arjun during a training session of Indian cricket team on Monday. The Twitter handle of The Board Of Control For Cricket In India (BCCI) shared the picture of Arjun Tendulkar and Ravi Shastri. "Words of wisdom from @RaviShastriOfc for young Arjun Tendulkar," the BCCI's post read. Arjun was selected in India's under-19 squad for the tour of Sri Lanka in July. He will also attend a U-19 camp at the National Cricket Academy under the supervision of WV Raman and Sanath Kumar ahead of the tour of Sri Lanka.

Words of wisdom from @RaviShastriOfc for young Arjun Tendulkar. pic.twitter.com/AEU8SOblC0

Virat Kohli-led India will travel to Ireland for two T20Is before returning to England for a long series comprising of three T20Is, three ODIs and five Tests.

Kohli and head coach Ravi Shastri had addressed the media in a pre-departure press conference in New Delhi.

"I wanted to experience the conditions in England, but in hindsight, I'm glad I didn't go there while I wasn't fully fit. It's better to be even 90 percent fit and skip. I am at 110 percent and ready to go," Kohli said about his fitness.

Ireland Cricket Team Arjun Tendulkar Cricket Ravi Shastri
Get the latest updates on ICC T20 Worldcup 2022, check out the Schedule and Live Score. Like us on Facebook or follow us on Twitter for more sports updates. You can also download the NDTV Cricket app for Android or iOS.