Kohli, ranked No.1 batsman in One Day Internationals, was in imperious form against the Proteas becoming the first batsman ever to score 500 or more runs in a bilateral ODI series. 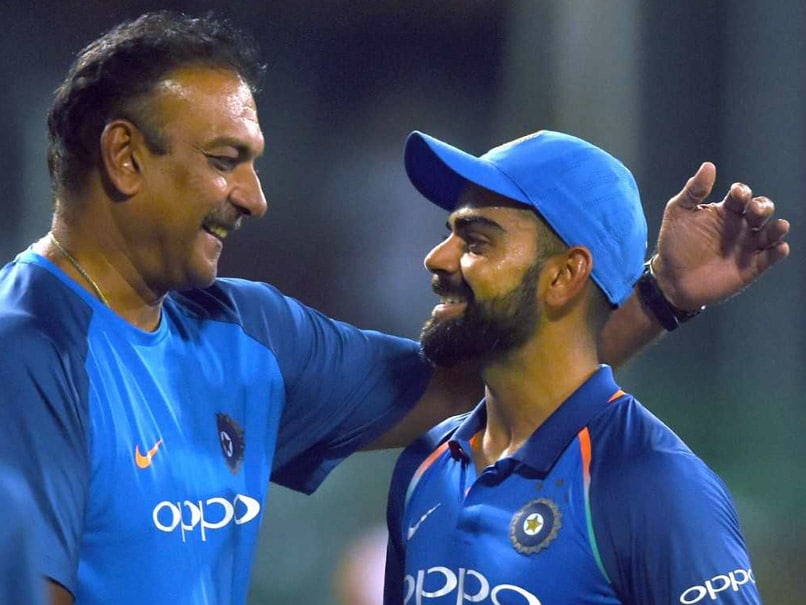 India cricket team coach Ravi Shastri on Monday likened skipper Virat Kohli to Pakistan's World Cup winning captain Imran Khan. Showering praise on Kohli's exploits in the recently-concluded South Africa tour, Shastri said the India skipper is already among the very best. "It's still early days forVirat. He is still very very young. But he is already there among the very best. He wants to lead by example. He reminds me a lot of Imran. He is still very young but he has got lot of qualities that Imran had when it came to leading a side. Which is great," news agency IANS quoted Shastri as saying to Anandabazar Patrika. Kohli, ranked No.1 batsman in One Day Internationals, was in imperious form against the Proteas becoming the first batsman ever to score 500 or more runs in a bilateral ODI series.

The dashing right-hander, rated as one of the finest in modern times, finished the series with 558 runs racking up three centuries, a record for an Indian batsman, and one fifty in six innings.

Imran led Pakistan to the 1992 World Cup and was arguably the best cricketer produced by Pakistan.

Asked about the similarities between Imran and Kohli, Shastri said the desire to always be on top and having an infectious energy level made him draw the comparison.

"Just the ability to always want to dominate, want to compete, irrespective of whatever conditions you get, believe that you can do it and when you have that kind of quality it spreads among the other players as well. And that was very similar to the way Imran led."

"I think he was fantastic on the last trip. It was a tough trip," Shastri said on Kohli's leadership and performance in South Africa.

India lost the Test series 1-2 but came back strongly in the 50-over format, winning the six-match series 5-1. In the T20Is, India edged past the hosts 2-1.

"When you are the leading batsman in the side plus the captain, plus the conditions you get, plus the side that you are playing which is formidable, you need to be on top of your game.

Shastri lashed out at former cricketers asking Kohli to cut down on his aggression on the field, saying they should allow him and his captain to go about their business.

"My only advice to them is to mind their own business. I will keep it very simple. Whoever is saying that, mind your own business. Let us get on with our job.

"I think he is absolutely fine. If there was a problem, the umpires are there. The match-referee is there to sort it out.

What are they there for? He is hardly been called by the match-referee for going over the top in his career. So where is the problem?"

India braved hostile batting conditions to win the game by 63 runs with batting salvos from Cheteshwar Pujara (50) and Kohli (54) in the first innings, then Ajinkya Rahane and (48) and Kohli (41) again in the second being the highlights.

"It has to go down as one of the most courageous and bravest batting performances ever," the 55-year-old opined.

"Not only in the history of Indian cricket but in the history of the game. Absolutely no question about that because the conditions were such and with the kind of attack they had, it needed a lot of guts, courage, application, determination to do what they did. And above all, belief. And there is a reason why I give them credit.

"On that track, everyone was surprised that we batted first. But the end result shows we were right," the former all-rounder added.

The South Africa sojourn, Shastri said, was the toughest of all, owing to the surfaces the tourists played on and still fought hard.

"It is one of the toughest tours and if you look at the pitches that were on offer to us, it is chalk and cheese when you look at the track that has been given against Australia.A

"When you look at the track now in Durban and looked at the tracks we played on, they look like chalk and cheese. And on those tracks, to perform the way they did, I think, was simply outstanding," Shastri said.

Australia are currently playing their first Test against South Africa in Durban.

Shastrisigned off by priding that they don't shy away from playing in any condition and never whine.

"I have always said that we don't want a team that would complain about the tracks. We will play on whatever is on offer.

And we will try and get the right combination to counter that."

Comments
Topics mentioned in this article
India Cricket Team South Africa Cricket Team Virat Kohli Ravi Shastri Cricket Nidahas T20 Tri-Series
Get the latest updates on ICC T20 Worldcup 2022 and CWG 2022 check out the Schedule, Live Score and Medals Tally. Like us on Facebook or follow us on Twitter for more sports updates. You can also download the NDTV Cricket app for Android or iOS.