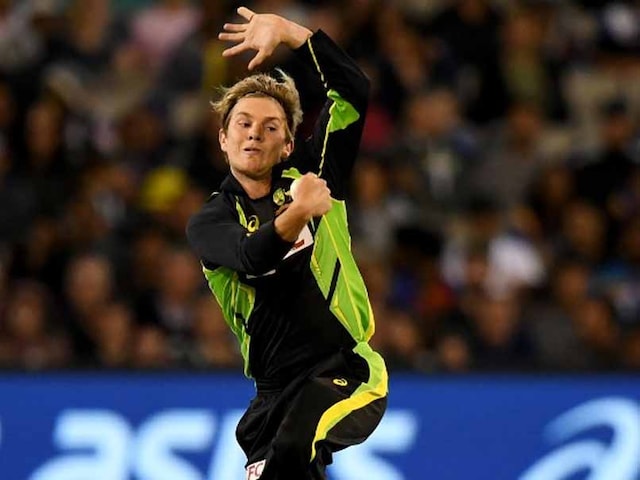 Leg-spinner Adam Zampa claimed three wickets to bowl Australia to victory and avoid a Twenty20 series wipe out against Sri Lanka in Adelaide on Wednesday. Man-of-the-match Zampa, who was left out of the previous match as the Sri Lankans won to clinch the three-match series, captured three for 25 at a crucial stage as Australia went on to win by 41 runs. "It is always nice to bowl the middle overs and it is very easy when you have a start like that," Zampa said. "Sri Lanka have very fearless players, sometimes it can be tough to bowl at them."

Openers Aaron Finch and Michael Klinger hit half-centuries as the Australians, with their leading stars in India for this week's Test series, set Sri Lanka 188 runs to win.

But the Sri Lankans could not reproduce another of their blazing late innings comebacks where they won the first two T20 games off the last ball.

"I thought we played some fantastic cricket tonight. A complete performance like this makes the last match even more heart-breaking," skipper Finch said.

"When you have Klinger at the other end, he lets you play your shots. We have been guilty of not converting starts. Today we had two fifties and Dunk and Head chipping in."

Sri Lanka's chase was given early impetus by Dilshan Munaweera, who smacked 37 from 25 balls, but from 41 without loss in the fourth over the tourists lost traction and slid to 76 for four in the 10th over.

Zampa claimed the vital wicket of man of the series Asela Gunaratne, leg before wicket for four in the 10th over and the tourists were unable to arouse another of their sensational finishes to beat Australia's total.

Gunaratne slammed a pulse-racing 84 to power Sri Lanka to a last-ball victory against Australia on Sunday after clubbing 52 off 37 balls in the opening win in Melbourne.

"Beating Australia in home conditions is a tough thing to do. The guys did a good job," skipper Upul Tharanga said.

"The innings Asela Gunaratne played in the second game in Geelong was amazing."

It was Sri Lanka's first defeat in six T20 internationals in Australia.

Skipper Finch was dropped by Munaweera before he had scored on the fifth ball of the Australian innings and went on to cash in with 53 off 32 balls with three sixes and five fours.

Adam Zampa is named the KFC Player of the Match with an outstanding spell of 3-25 from his four overs #AUSvSL pic.twitter.com/DDFG6lopLR

Klinger proved the mainstay of the innings with 62 from 43 deliveries with six fours and a six.

The opening pair put on 79 runs for the first wicket.

Ben Dunk (28 from 21 balls) and Travis Head (30 from 16) contributed useful knocks to get to 179 for two before a late flurry of wickets cost Australia a chance to top a 200 total.

Sri Lanka claimed four wickets for eight off the final 11 deliveries with Lasith Malinga taking two for 35 and Chamara Kapugedera taking three catches in the deep.

Comments
Topics mentioned in this article
Australia Cricket Team Sri Lanka Cricket Team Adam Zampa Adelaide Oval, Adelaide Cricket
Get the latest updates on IPL 2020, check out the IPL Schedule for 2020 and Indian Premier League (IPL) Cricket live score . Like us on Facebook or follow us on Twitter for more sports updates. You can also download the NDTV Cricket app for Android or iOS.