CWG 2018, Day 8, HIghlights: Sushil Kumar overpowered Johannes Botha of South Africa by technical superiority in the final. This is India's 14th gold medal at the Games. 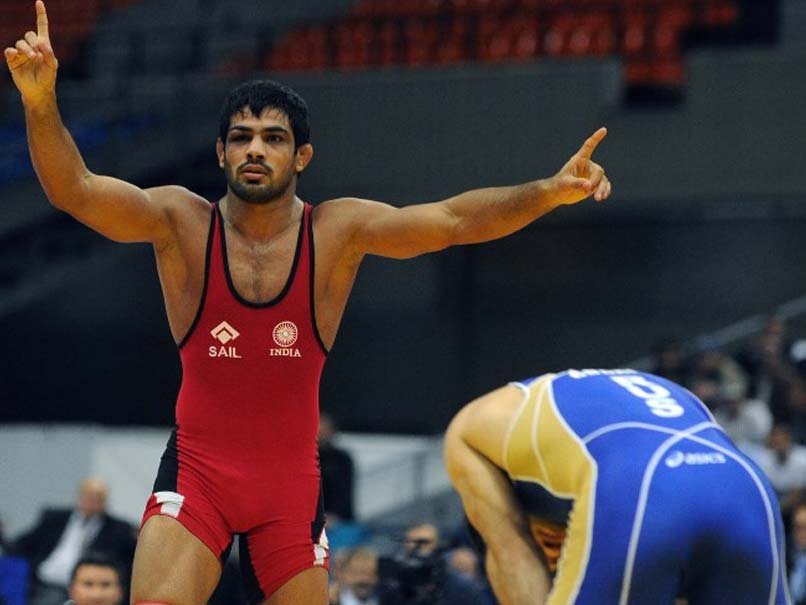 Double Olympic-medallist Sushil Kumar (74kg) and Rahul Aware claimed contrasting gold medals even as defending champion Babita phogat (53kg) settled for a silver on the opening day of the 21st Commonwealth Games' wrestling competition. Sushil took a minute and 20 seconds to defeat Johannes Botha of South Africa on technical superiority to claim his third successive gold medal at the Games. Aware, on the other hand, prevailed 15-7 over Canada's Steven Takahashi in an exciting contest during which the Indian was troubled by a groin niggle but chose to carry on with more than a minute left on the clock. Aware's triumph opened India's gold medal account in the three-day wrestling competition at the Games.

However, Babita settled for silver after being outmanuevered by Canada's Diana Weicker in the summit clash. Babita, who claimed a silver in the 2010 edition before a gold in Glasgow, failed to break through her rival's defences, going down 2-5 in the contest.

Young Anjum Moudgil, the other Indian shooter in the fray, finished a lowly 16th with 602.2.

India's women's hockey team lost 0-1 to defending champions Australia in a semi-final. Grace Stewart's 37th-minute field goal gave the hosts the win to set-up a title clash with New Zealand, who overcame England 2-1 via penalty shootout in the other semi-final.

India will play England in the bronze-medal playoff on Saturday at the Gold Coast Hockey Centre.

The 22-year-old will now face Tianwei Feng in the semis on Saturday.

Seema Punia and Navjeet Dhillon clinched the silver and bronze medal respectively in the women's discuss throw. In the first attempt, Seema successfully got past the 60 metre-mark with her best throw of 60.41m to bag silver. This is her fourth successive podium finish in this event at the Games, following silver in both 2006 and 2014, and a bronze at home in Delhi in 2010.

Her compatriot Navjeet managed to throw her best 57.43m in her sixth attempt to sit at the third place.

After throwing 60.41m in the medal clinching attempt, the second attempt saw Seema Punia throwing 59.57. But in the third attempt, Seema fouled and in the fourth she only managed to throw 58.54, managing to stay in the top three.

Her fifth attempt was disqualified.

Navjeet, on the other hand, was out of top three from the start, clearing 55.61 in first attempt and 56.22, 54.09 in the fourth and fifth attempt respectively. She was behind Sositina Hakeai of New Zealand till then but the final attempt saw her throwing her best 57.43m which helped him to move at the third place, replacing the New Zealander. Hakeai (57.16m) best throw came in his third attempt.

18:15 IST: It was good outing for the Indian contingent on Day 8 of the Games as they won a total of seven medals and remain at the third spot with a total tally of 31 medals. Sushil Kumar was a star on display for India as he claimed his third straight CWG gold. Rahul Aware also came to the party with a gold of his own as the Indian kitty saw the addition of a silver from Babita Kumari and a bronze medal from Rinku on the women's side. With more events lined up on Day 9, India would be all geared up for more success.

18:10 IST: India lose 0-1 to Australia in the women's Hockey semi-final match. The Indian team will face England in the bronze medal match.

FT| Despite a close-fought encounter, the Indian Eves sustain a 0-1 defeat against the @Hockeyroos in the Semi-Final of the @GC2018 Commonwealth Games. The team will now play its 3/4th place play-off against England on 14th March. pic.twitter.com/fWZCWUcgHo

17:50 IST: At the end of the third quarter, India trail Australia 1-0 in the women's hockey semi-final tie.

17:30 IST: The third quarter of the women's hockey semi-final match between India and Australia starts.

17:14 IST: India is currently tied at 0-0 with Australia in the Women's semi-final hockey match.

16:58 IST: DISCUS THROW -- Seema Punia fails in her fifth attempt but remains in the second position.

16:55 IST: Table Tennis -- Mouma Das pulls one back. She now trails 1-3 in the women's Singles Quarterfinal.

16:20 IST: India's Seema Punia and Navjeet Dhillon are in action in the Women's discus throw final.

16:10 IST: Table Tennis -- India's Manika Batra advances to the semi-finals of the Women's singles table tennis event after beating Yihan Zhou of Singapore 11-5, 11-6, 11-2, 6-11, 11-9. While in Men's Doubles Round of 16 SQUASH, Vikram Malhotra and Ramit Tandon are up against Chris Binnie and Lewis Walters of Jamaica.

15:15 IST: BADMINTON: Saina Nehwal advances to the quarterfinals after her opponent Jessica Li of Isle of Man retired in second game

09:41 IST: SHOOTING: After Series 1, Tejaswini Sawant is at number 10 and Anjum Moudgil at 14 in Women's 50m Rifle Prone Finals

I have reached the finals by beating Connor Evans of Australia by 4-0. All set to bring the gold for my Nation in #CWG2018 #JaiHind

09:21 IST: BADMINTON: India's Kidambi Srikanth is in action against Sri Lanka's Niluka Karunaratne in Men's Singles Round of 16 match

08:50 IST: BADMINTON: India's HS Prannoy is in action against Australia's Anthony Joe in Men's Singles Round of 16 match

On the badminton court, the stars of the mixed team's gold medal winning campaign began their singles run and with easy opponents in opening rounds and the likes of P V Sindhu, Saina Nehwal and K Srikanth hardly took less than 20 minutes each to move into the pre-quarters. Most of the table tennis and squash players made their way into pre-quarters of their respective individual and doubles events. In squash, the spotlight is on defending gold medallists Joshna Chinnappa and Dipika Pallikal, who won their opening match. There was disappointment in the athletics arena where high jump hope Tejaswin Shankar ended up sixth after fouling all his attempts at 2.27m even though his personal best stands at 2.28m. It's the first time I am experiencing something like this. I still have a lot of big competitions coming up this year. The biggest positive is that I could hold my nerve against these big competitors. I realised they are people like me, they are not gods, Shankar said. Also finishing sixth was Hima Das, but in the 400m women's race. She could, however, take solace from the fact that she achieved a personal best of 51.32 sec.

Comments
Topics mentioned in this article
Shooting CWG 2018 India Sushil Kumar
Get the latest updates on India vs Australia Series, check out the India vs Australia Schedule for 2020-21 and Ind vs Aus live score . Like us on Facebook or follow us on Twitter for more sports updates. You can also download the NDTV Cricket app for Android or iOS.