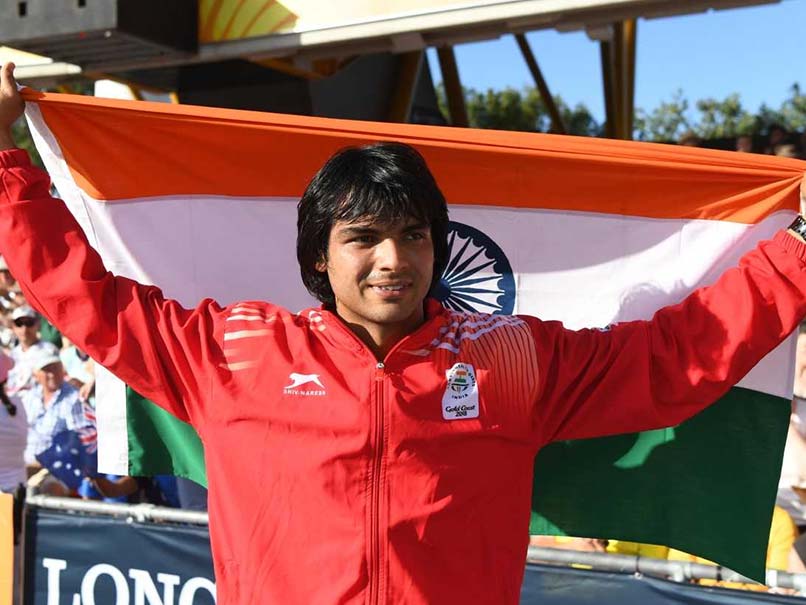 Chopra became the first Indian javelin thrower to claim a gold medal at the Commonwealth Games, pulling off a season's best effort of 86.47m in the final in Gold Coast. The 20-year-old former junior world champion had made the final after achieving the qualifying mark in his very first throw on Friday and, on Saturday, he was again leaps ahead of the field with his very first throw. Neeraj was the favourite for gold after his 85.94m throw during the Federation Cup National Championships last month and he achieved India's first gold in athletics in this edition of the Games.Hamish Peacock took the silver medal for Australia with 82.59m while Grenada's Anderson Peters hurled the javelin a distance of 82.20m for the bronze. Sanjeev Rajput clinched the gold medal in men's 50m Rifle 3 Positions. Sanjeev shot a total of 454.5 to create a Commonwealth Games record. Grzegorz Sych of Canada finished second with 448.4 and Dean Bale of England bagged the bronze medal with 441.2 points. Chain Singh, the other Indian in the fray, finished fifth in the standings with 419.1. Star Indian boxer MC Mary Kom won gold in the women's 48 kilogram category. Mary defeated Kristina O'Hara of Northern Ireland by a unanimous 5:0 verdict to take the title. Indian boxer Gaurav Solanki won the gold medal in the men's flyweight (52 kilogram) category. Solanki won a tough, fast paced, tactical battle by a split 4:1 verdict against the impressive Brendan Irvine of Northern Ireland in the final. Meanwhile, India's Manish Kaushik had to be content with silver in the men's lightweight (60kg) division. Kaushik lost 2:3 to Harry Garside of Australia in a hard-fought final. World No.3 PV Sindhu set up an all-Indian women's singles final with World No.12 Saina Nehwal in women's badminton competition. While Sindhu thrashed Canada's Michelle Li in straight games 21-18, 21-8 in the semi-final, Saina overcame a stiff contest from Scotland's Kirsty Gilmour winning by 21-14, 18-21, 21-17, and set her date with her compartriot in the summit clash on Sunday. Both Sindhu and Saina kept their unbeaten run alive and their victories over lower-ranked opponents went on expected lines. India's Manika Batra came through in a tight encounter to make her way through to the final of women's singles table tennis competition. Manika defeated Tianwei Feng of Singapore 4-3 (12-10, 5-11, 11-8, 5-11, 5-11, 11-9, 13-11) in a topsy turvy encounter. Indian wrestlers did the nation proud as Sumit Malik won the 125 kilogram freestyle title while Vinesh Phogat took women's 50kg gold. Sumit won all his four bouts in the Nordic (round robin) format to emerge champion. Korey Jarvis of Canada got the silver while Pakistan's Tayab Raza took the bronze. Among the women, Vinesh won gold in the 50kg competition as she ended at the top of the standings at the end of the Nordic format. Vinesh defeated Miesinnei Genesis of Nigeria, Rupinder Kaur of Australia and Canada's Jessica MacDonald. India got another medal when Somveer bagged bronze in the men's 86kg division. Somveer defeated Alexander Moore of Canada 7-3 in the play-off for the bronze medal.

18:17 IST: Thank you for staying with us for the live updates of the tenth day. We will be back again tomorrow for the final day action from the Gold Coast.

Manika Batra has been a super star in #CWG2018. She has been phenomenal in every match! Winning a in the women's singles final against #Singapore, she has made super proud! #IndiaAtCWG #CWG2018 #GC2018TableTennis #TOPSAthlete #SAI pic.twitter.com/TPbkoPx3GR

Here is the Starting XI of the Indian Men's Team who will take on England for the Bronze Medal of the @GC2018 Commonwealth Games on 14th April. Witness it LIVE on Sony SIX/SIX HD, Sony TEN 3/TEN 3 HD and @SonyLIV at 2:30 PM (IST).#IndiaKaGame #INDvENG #GC2018 #HallaHockeyKa pic.twitter.com/DaygPLv5Ot

Congratulations Somveer for winning bronze in men's freestyle #wrestling in 86kg category. Very well fought! There is lot more to achieve and you are capable of it. Keep it up!!
#IndiaAtCWG #CWG2018 #GC2018Wrestling #SAI pic.twitter.com/cchXJyklVa

#India's golden run continues!
Clinching a in the 50kg category, Vinesh Phogat has made the nation proud setting an example for many! #IndiaAtCWG #CWG2018 #GC2018Wrestling #TOPSAthlete #SAI pic.twitter.com/x0TWaIGkMG

And here's our 62kg category medalist wrestler Sakshi Malik!
It was a close win indeed.
Wishing you all the best for the future, Sakshi! #IndiaAtCWG #CWG2018 #GC2018Wrestling #TOPSAthlete #SAI pic.twitter.com/J1qAIpb44D

And we have our javelin throw !
Many congratulations to Neeraj Chopra for grabbing a in the finals with 86.47m Season's Best!
A well deserved win indeed!#IndiaAtCWG #CWG2018 #GC2018JavelinThrow #TOPSAthlete #SAIpic.twitter.com/gv2nfgm5H9

10:40 IST: ATHLETICS: With a throw of 85.50 in his first attempt, Neeraj Chopra moves into gold medal position in Men's Javelin Throw Final

I Dedicated my #GC2018boxing Gold Medal to my 3 sons, Rechungvar,Khupneivar &Prince , calling me MAMA when r you coming home. I thank my coaches, support staffs, @BFI_official, @Media_SAI for believing in me #PunchMeinHaiDum

Indian Boxers continue to rule the boxing ring at #CWG2018.

Put your hands together for Gaurav Solanki for winning in 52 kg men's boxing. He was phenomenal in the ring. #GC2018Boxing #IndiaAtCWG #SAI pic.twitter.com/Wqu7cZrQwF

08:40 IST: SHOOTING: After the Prone round, Sanjeev Rajput is in 2nd position, while Chain Singh is 3rd in 50m Rifle 3 Positions Men's Finals.

08:28 IST: After the kneeling round, Sanjeev Rajput is in 3rd position, while Chain Singh is 4th in 50m Rifle 3 Positions Men's Finals.

Congratulations Magnificent Mary for the Gold. What a champion and what an inspiration you are ,Mary Kom ji ! #CWG2018 pic.twitter.com/Z9QGxSX5bI

Congratulations to the boxing legend, Mary Kom for becoming the first Indian women to win a boxing Gold at the #CWG2018 ! pic.twitter.com/cjv1hWuYtD

'Never Buy Gold, Simply Earn It'- Mary Kom@MangteC believes in earning for #India and she did that exactly today by winning a in women's 48 kg at #CWG2018.

A #Golden dream come true for @MangteC and #TeamIndia!

06:50 IST: Hello and welcome to the Live updates of the Commonwealth Games 2018 in Gold Coast in Australia.

On day 9, world no.1 Kidambi Srikanth stormed into the badminton men's singles semi-finals thrashing Singapore's Zin Rei Ryan in straight games. Srikanth, who rose to the No.1 spot in the Badminton World Federation (BWF) rankings on Thursday, hardly lost any sweat in thrashing the Singaporean 21-15, 21-12 at the Carrara Sports Arena.

Indian shooter Bhanwala became the country's youngest ever gold medal winner in the Commonwealth Games. Anish achieved the feat when he stormed his way into the gold medal with a Games record in the men's 25m rapid fire pistol event at the Belmont Shooting Centre. The Haryana boy shot down the CWG record in the final with a score of 30 including four series of 5 each. The youngest in the field, he showed nerves of steel and led the more experienced shooters through the event to emerge deserving champion. Australia's Sergei Evglevski claimed the silver with 28, while the bronze medal went to Sam Gowin (17) of England.

Shooters Tejaswini Sawant and Anjum Moudgil won gold and silver respectively in the Women's 50m Rifle 3 Positions at the 21st Commonwealth Games. Tejaswini registered a new Games record 457.9 points to take the title. Anjum scored 455.7. Seonaid McIntosh of Scotland took bronze with 444.6. Indian wrestler Bajrang Punia entered the final of the men's 65 kilogram category at the 21st Commonwealth Games. The Indian came up with an awe inspiring performance to win all his bouts by technical superiority. Bouts are awarded on the basis of technical superiority when a wrestler takes a lead of 10 or more points.

Comments
Topics mentioned in this article
Other Sports CWG 2018 India Boxing Badminton Kidambi Srikanth
Get the latest updates on ICC Women's Cricket World Cup 2022 and IPL 2022, check out the Schedule , Live Score and IPL Points Table. Like us on Facebook or follow us on Twitter for more sports updates. You can also download the NDTV Cricket app for Android or iOS.