Shane Watson was fined USD 750 for breaching the Champions League Twenty20 Code of Behaviour during the first semis against Chennai Super Kings at the Sawai Mansingh Stadium in Jaipur. 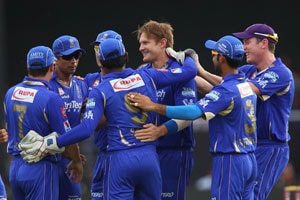 Shane Watson of the Rajasthan Royals was fined USD 750 for breaching the Champions League Twenty20 Code of Behaviour during the first semi-final against Chennai Super Kings at the Sawai Mansingh Stadium in Jaipur.

"Watson admitted to the Level 1 offence (Section 1B - 1.4) of using language that is obscene, offensive or insulting and/or making an obscene gesture," said a CLT20 statement on Saturday.

For Level 1 breaches of the Code of Conduct, the match referee's decision is final and binding.

The Royals beat the Super Kings by 14 runs on Friday to enter the CLT20 final, which will be held in New Delhi on October 6.

Meanwhile, in another on-field blow for the inaugural Indian Premier League champions, their in-form batsman Brad Hodge was ruled out of the final due to a knee injury. (Read more)

Hodge, who has hit 109 runs in three innings at a strike rate of 198, has been vital for Rajasthan side throughout this CLT20.

Comments
Topics mentioned in this article
Cricket Brad Hodge Shane Watson Champions League Twenty20 2013 Chennai Super Kings Rajasthan Royals
Get the latest updates on ICC T20 Worldcup 2022 and CWG 2022 check out the Schedule, Live Score and Medals Tally. Like us on Facebook or follow us on Twitter for more sports updates. You can also download the NDTV Cricket app for Android or iOS.