Ryder, who has endured a tumultuous year that included a drugs ban and a near-fatal beating, aims to return to the New Zealand side for upcoming home series against the West Indies and India. 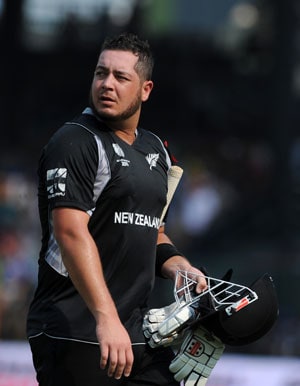 Troubled New Zealand batsman Jesse Ryder resumed his cricket career on Monday, targeting a return to the Black Caps after a tumultuous year that included a drugs ban and a near-fatal beating.

Ryder linked up with his new domestic team the Otago Volts for the first time after serving a six-month ban for testing positive to banned substances contained in a weight-loss supplement.

He aims to play in the Volts' season opener against his former team Wellington Firebirds next weekend, with the longer-term aim of returning to the New Zealand side for upcoming home series against the West Indies and India.

"But, definitely, the main aim is to try and earn a call-up in time for that Indian tour if they don't pick me for the West Indies tour."

The West Indies play three Tests in New Zealand from December 3 with the Black Caps hosting India in January-February.

Ryder is one of New Zealand's best batting talents, averaging 40.93 in 18 Tests, but his career has been marred by disciplinary lapses, off-field problems and struggles with his fitness.

The 29-year-old went into self-imposed exile from international cricket in February 2012, saying he needed to sort out his personal issues.

He appeared to be making progress and was set to take up a lucrative Indian Premier League contract in March before he was assaulted outside a bar in the South Island city of Christchurch.

Ryder, who witnesses said did nothing to provoke the attack, was put into an induced coma with a fractured skull and said he was fortunate to be alive.

"We've all heard the stories of guys hitting their heads and dying after being punched and falling to the ground," he told Fairfax. "I look back and think I am lucky not to be dead."

Then the doping ban extended his time away from the game, forcing him to train by himself as his new teammates at the Volts prepared for the upcoming season.

The New Zealand Sports Tribunal accepted Ryder was trying to lose weight, not enhance his performance, when he took the over-the-counter supplement, but imposed a ban after finding he should have been more cautious.

Ryder said he felt in good shape, even if there were still some complications linked to the assault.

"The body's pretty good," he said.

"I'm still suffering a little with the head, you know, just some light-headedness. But that's slowly getting better. I've been training hard and everything's coming along really well."

Comments
Topics mentioned in this article
Cricket Brendon McCullum Sreesanth Champions League Twenty20 2013 Jesse Ryder Pakistan Cricket Team New Zealand Cricket Team
Get the latest updates on IPL Auction 2023 and check out  IPL 2023 and Live Cricket Score. Like us on Facebook or follow us on Twitter for more sports updates. You can also download the NDTV Cricket app for Android or iOS.