He won't be seen on the cricket field as a cricketer any more but Dravid, who now plans to take a holiday, says that keeping the sport clean will need constant monitoring. 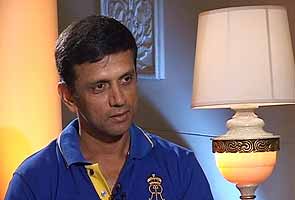 Former India cricketer Rahul Dravid, who played his final competitive match on Sunday, said that cricket and Indian Premier League in particular needs constant vigilance to ensure it is kept clean and free from the influence of miscreants.

Known for being a true gentleman in international cricket, Dravid played his final match for Rajasthan Royals in the Champions League T20 match against Mumbai Indians on Sunday. While he said his journey with the team was emotional, the spot-fixing scandal involving three Royals' players was disappointing. "Will it (cricket) be clean ever again? I don't know. But what this (spot-fixing scandal) taught us is that you will have to be vigilant all the time. This has taught us that you can never put your foot down because the people who want to corrupt the game are not going away. You have to be a lot more sharper," the veteran player told NDTV in an exclusive chat on Monday.

Dravid also said that keeping cricket clean was all about individuals making the right decisions. "You can have as much policing as you want but if individuals make the wrong choices, sometimes, it's very hard."

His journey with the Rajasthan franchise - one which began in 2010 - involved several highs and lows. Three players - S Sreesanth, Ankeet Chavan and Ajit Chandila - were accused of spot-fixing in this year's IPL and subsequently banned for varying periods by the Board of Control for Cricket in India. For Dravid though, his time here -despite the controversy - was an enriching experience. "The whole journey has been very memorable. Yesterday was a good night and even though we lost, there were plenty of good things including the lovely reception I got from both teams. I will always cherish it," he said but added that leaving Test cricket was more emotional for him personally.

Asked if he plans to continue to be associated with the sport, Dravid said he will take a decision when the time demands it. " I have not really had this conversation. I will decide when the time is right but the time now is to take a holiday." (Also read: Watson in line for Royals' captaincy, Dravid may return as mentor)

Comments
Topics mentioned in this article
Champions League Twenty20 2013 Cricket Rahul Dravid
Get the latest updates on Fifa Worldcup 2022 and check out  Fifa World Cup Schedule, Stats and Live Cricket Score. Like us on Facebook or follow us on Twitter for more sports updates. You can also download the NDTV Cricket app for Android or iOS.