Team owners say this is their way to pay tribute to Sachin Tendulkar, who has announced his retirement from Test cricket. 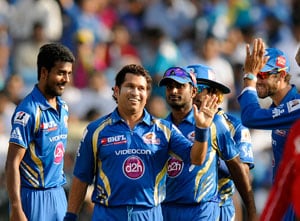 The Champions League Twenty20 and Indian Premier League champions Mumbai Indians have decided to 'retire' Sachin Tendulkar's patent No.10 jersey as a mark of respect to the iconic cricketer. The Master Blaster announced on Thursday that he will retire from Test cricket after his 200th Test next month.

This year's CLT20 was the last professional tournament that Sachin played in coloured clothing and he wore the No.10 shirt. The batting stalwart had announced his retirement from T20 cricket after Mumbai won the IPL in May.

"I think it was a befitting tribute to our 'Master' as we call him. Winning the IPL as well as the Champions League T20 in the same season is a great achievement. It's a very emotional moment for us and we have decided to retire his No. 10 jersey," team owner Nita Ambani told the DNA newspaper.

It was last year that the Mumbai franchise had started a campaign to retire Tendulkar's jersey after he quit ODIs in December. However, the Board of Control for Cricket in India is yet to take a decision on retiring Tendulkar's No. 10 jersey.

Former India fast bowler and Tendulkar's long-time teammate and close pal Ajit Agarkar said the call to retire the jersey should be given to the man himself. "The practice of retiring a legend's jersey is prevalent in the West. I don't think it happens in cricket. Sachin is the right person to talk on this," said Agarkar.

In football, the process of 'retiring' jerseys has been quite prevalent. Brazilian legend Pele's No.10 shirt was retired, however star footballers like Zico, Rivaldo and more recently, Kaka wore it. Argentine great Diego Maradona's No.10 jersey was retired in 2001 and is now sported by Barcelona's star striker Lionel Messi.

Comments
Topics mentioned in this article
Cricket Mumbai Indians Champions League Twenty20 2013 Sachin Ramesh Tendulkar
Get the latest updates on Fifa Worldcup 2022 and check out  Fifa World Cup Schedule, Stats and Live Cricket Score. Like us on Facebook or follow us on Twitter for more sports updates. You can also download the NDTV Cricket app for Android or iOS.