The former India skipper says there is too much speculation about Sachin's retirement, which is putting pressure on him and hopes the Master Blaster should leave the game only after playing a match-wining knock. 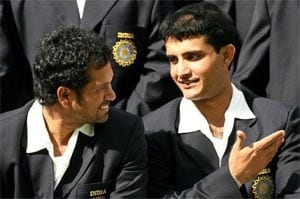 "There is too much speculation about his retirement, which is putting pressure on him. While I believe his retirement is not very far, I hope he bids adieu with his bat held high. He should leave the game only after playing a match-wining knock," said Ganguly.

Ganguly wished that Tendulkar, who on Sunday played career's last Twenty20 match with his Mumbai Indians winning the Champions League Twenty20 title, repeats the same feat with India triumphing over the visiting West Indies against whom he is slated to play his historic 200th Test Match.

"Sachin's achievements and credentials won't be lowered if he continues to play for some more time. But I sincerely hope is he quits the game only after playing well, be it against the West Indies or South Africa," said Ganguly.

Hailing Harbhajan Singh for his match winning abilities, Ganguly hoped the offspinner would make a comeback to the Indian team sooner than later.

"Harbhajan is a match winner. His biggest trait is his ability to perform when the chips are down. There are no doubts about his class and sooner than later he will be back in the Indian team," he said.

Harbhajan clinched the Man of the Match award for his match-winning performance in Sunday's Champions League T20 final. The offie clinched three wickets in the 17th over to turn the match in his side's favour and ended with figures of 4/32 from four overs.

Comments
Topics mentioned in this article
Cricket Champions League Twenty20 2013 Sachin Ramesh Tendulkar Sourav Ganguly
Get the latest updates on Fifa Worldcup 2022 and check out  Fifa World Cup Schedule, Stats and Live Cricket Score. Like us on Facebook or follow us on Twitter for more sports updates. You can also download the NDTV Cricket app for Android or iOS.