CLT20 final: How Harbhajan Singh shone despite lack of practice

Harbhajan Singh's 17th over against Rajasthan Royals was crucial in helping Mumbai Indians claim the Champions League T20 title for the second time. 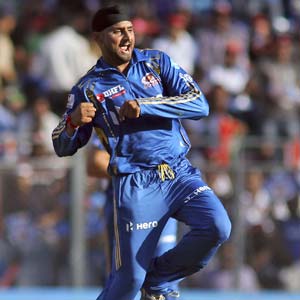 Mumbai Indians' off-spinner Harbhajan Singh was his best with the ball during the Champions League Twenty20 final against Rajasthan Royals at Feroz Shah Kotla stadium in Delhi on Sunday. His four for 32 won him the Man of the Match award and helped Mumbai Indians claim their second Champions League title with a 33-run win over the Royals.

The elated bowler may not have had much practice ahead of the tournament, but sad that his heroic effort in the title clash was the best he had bowled in the last three months.

"I'm happy with the way I finished, although I didn't practice at all. I was travelling to the US (and so,) didn't practice much before this but I'm really happy with the way I have finished this tournament. I think that over where I took three wickets was probably the best over I've bowled in the last three months," Harbhajan said at the post-match presentation. (Match highlights)

Harbhajan's last competitive tournament before CLT20 was the Indian Premier League season earlier in the year, which was also won by Mumbai Indians. He has not been part of any of India A's recent squads.

On Sunday night though, Harbhajan was unforgiving.

Chasing a stiff target of 203 for a win, Rajasthan Royals were on course for a win, courtesy Saju Samson (60) and Ajinkya Rahane's (65) 109-run stand for the second wicket. Harbhajan though turned it around in the 17th over of the match. (Match in pics)

Bhajji came on to bowl his last over with Rajasthan Royals requiring 48 off 24 balls with seven wickets intact. He removed a well-set Ajinkya Rahane off his first delivery. He then got rid of Stuart Binny three balls later and made Kevon Cooper his final victim. He had earlier scalped Shane Watson.

From here on, Rajasthan went from 117/1 to 169 all out in the space of seven overs. A beaming Mumbai Indians' skipper Rohit Sharma credited Harbhajan's effort for the triumph.

"He's a match winner, he brought us back in the game. I was not worried about his recent form. I knew he would deliver in a big game," said Rohit.

Royals captain Rahul Dravid too felt that it was Harbahajan who turned the match away from him and his side.

"We saw some really great batting and we saw some good skills with the ball as well, from the spinners and it was a close game right till the end. I thought the couple of overs when Harbhajan Singh got four wickets for eight or nine runs probably turned the game on its head," Dravid said. (Stats)

Harbhajan's next target is to perform well in Duleep Trophy and he is also hopeful of representing India again.

"This is probably the second time I am getting the Man of the Match in a final. Hopefully few more (to come). I'm looking forward to the Duleep Trophy and the long season up ahead for India," he said.

Comments
Topics mentioned in this article
Cricket Mumbai Indians Rajasthan Royals RG Sharma Rahul Dravid Harbhajan Singh Champions League Twenty20 2013
Get the latest updates on Fifa Worldcup 2022 and check out  Fifa World Cup Schedule, Stats and Live Cricket Score. Like us on Facebook or follow us on Twitter for more sports updates. You can also download the NDTV Cricket app for Android or iOS.