Opting to field, Mumbai restricted Trinidad to 153/5, and chased down the target in 19.1 overs. 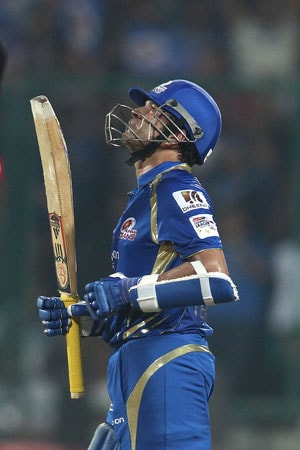 The Champions League T20 semifinal on Saturday, between Mumbai Indians and Trinidad and Tobago at the Feroz Shah Kotla in New Delhi, was touted as one between Mumbai's batsmen and T&T's bowlers. But with Sunil Narine being the only T&T bowler to come to the party, the 153 for 5 they scored after being put in to bat proved woefully short, Mumbai notching up a six-wicket win with five balls to spare and lining up a date with Rajasthan Royals for Sunday's final.

Mumbai's start to the chase was certainly not a blazing one, but with Dwayne Smith around, the big hits are never too few or far between. Although Sachin Tendulkar, who was scratchy to start with, played a glorious on-the-rise off drive off Ravi Rampaul, it was Smith once again who gave the innings its early momentum.

As Yannick Ottley, the left-arm spinner, came on to bowl the sixth over, Tendulkar got his innings moving. He smashed the second ball over long on and the next one over cover. The crowd was finally getting what it wanted. Tendulkar gave them another reason to cheer when he became the first Indian and the 16th in the world to reach 50,000 runs in recognised cricket (first-class, List A and Twenty20) when he pushed Ottley to the leg side for a single.

The attention might have been on Tendulkar, but that didn't stop Smith from flexing his muscles, a short-arm pull for four and a flat six to long on, both off Lendl Simmons, standing out for the ferocity with which they were played. Smith also brought up yet another half-century in due course before Tendulkar fell, nicking a wide delivery from Simmons to Denesh Ramdin, after scoring 35 in 31 balls. (Match in pics)

That was the cue for Narine to announce his entry. Ramdin snapped up Ambati Rayudu for a duck off one that drifted away and in the next over Narine beat Smith's attempted sweep to hit off stump, Smith gone for a 38-ball 59.

It was match on at that stage. Mumbai needed 58 off 48 balls with seven wickets in hand with the undecipherable Narine on the hunt. Rohit Sharma took Mumbai closer to the target, hitting two sixes to notch up a 22-ball 25, before he became Narine's third wicket - bowled neck and crop by a legspinner. Mumbai still needed 14 off the last two overs. But, fortunately for them, Narine had been bowled out by then. (Match highlights)

T&T were also clearly missing the services of Rayad Emrit, who left the field after hurting his hand in the first over, and the end came with Dinesh Karthik (33*) hitting Ravi Rampaul for a six and a four in the penultimate over and rounding things off with a six over cover off Simmons in the last.

Earlier, T&T's batting effort was largely about Evin Lewis's enterprise and contributions from here and there.

"Evin is carrying our batting, he's been outstanding," David Williams had said the day before the game when told that T&T's batting, despite the fact that they had topped their group, looked a bit careworn. And Lewis was back at it on the night.

When he was dismissed caught and bowled by Kieron Pollard off the leading edge - immediately after Pollard had pulled up on his follow through and given Lewis a long stare - he had scored 62 in 46 balls out of a team total of 93 in 13.1 overs.

The big hitting had started from the first over itself, when he edged Mitchell Johnson past first slip for four and then slashed him over third man for six. He looked unfazed even as Simmons fell at the midwicket boundary trying to tonk Harbhajan Singh in the second over, Darren Bravo was stumped down the legside off Pragyan Ojha with the total on 61 and Ottley struggled to get a move on.

Johnson, brought in for Glenn Maxwell, was treated the shabbiest, going for 12 runs in each of his first two overs, his extra pace - Johnson even touched 150 kmph on occasion - clearly to Lewis's liking as the ball went off the bat even faster. The other bowlers also came in Lewis's line of fire.

Lewis's value for T&T became evident after he was dismissed, as Ramdin and Ottley struggled for a while and it looked like T&T would have to settle for a below-par score.

Not quite, because after Ramdin was bowled by Johnson in the 16th over, Ottley and Nicolas Pooran got their big hits out, Ottley in particular looking better and better as the overs started to run out. Pooran hit a slower delivery from Nathan Coulter-Nile, easily Mumbai's best bowler, for a glorious six while Ottley found Rishi Dhawan easy meat, slamming the young pacer for two big sixes. Pooran fell caught at long off in the last over, bowled by Coulter-Nile, but Ottley stayed till the end, unbeaten on a 30-ball 41.

In the end, the 153 they combined to score proved too few.

Comments
Topics mentioned in this article
Cricket Mumbai Indians Trinidad and Tobago Champions League Twenty20 2013 Mitchell Johnson RG Sharma Glenn Maxwell
Get the latest updates on ICC T20 Worldcup 2022 and CWG 2022 check out the Schedule, Live Score and Medals Tally. Like us on Facebook or follow us on Twitter for more sports updates. You can also download the NDTV Cricket app for Android or iOS.