Brad Hodge's 109 runs at a strike rate of nearly 200 has been instrumental in Rajasthan Royals reaching the final of the Champions League T20. 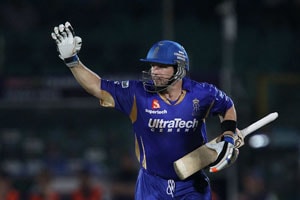 Rajasthan Royals middle-order batsman Brad Hodge has been ruled out of the final of the 2013 Champions League Twenty20 due to a knee injury. The Royals coach Paddy Upton confirmed the news to ESPNCricinfo. The Australian T20 veteran hurt his knee during the first semi-final against the Chennai Super Kings on Friday.

Hodge, 38, had collided with Shane Watson while fielding in the final over of match, which they won by 14 runs at the Sawai Mansigh Stadium in Jaipur. The news comes as a body blow to the inaugural Indian Premier League champions as Hodge was in sublime big hitting form during the course of the CLT20.

Coming in at No.6 and 7, Hodge has scored a total of 109 runs in three outings this CLT20 with a strike rate of nearly 200 (198) and has been dismissed just once. His 52 not out against Otago Volts not only broke the New Zealand side's 14-match winning streak but helped Rajasthan secure the home semi-final by topping the Group A. Â

Right-arm speedster Shaun Tait is the only other foreign player available for the Royals in their squad.

Comments
Topics mentioned in this article
Cricket Brad Hodge Shaun Tait Champions League Twenty20 2013 Rajasthan Royals
Get the latest updates on ICC T20 Worldcup 2022 and CWG 2022 check out the Schedule, Live Score and Medals Tally. Like us on Facebook or follow us on Twitter for more sports updates. You can also download the NDTV Cricket app for Android or iOS.