Rajasthan Royals will not be underdogs by any stretch, coming in with a perfect 12-0 record at home this year, but as Chennai Super Kings have shown, they more than any other team in the short history of franchise cricket in India are able to raise their game when it counts. 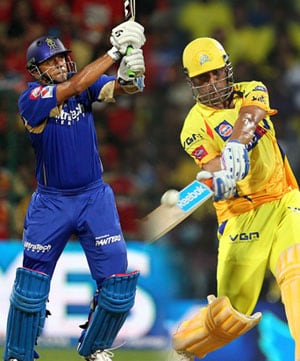 When Rajasthan Royals finished on top of the table in Group A and booked themselves a home semifinal in the Champions League Twenty20 2013 at the Sawai Mansingh Stadium in Jaipur on Friday (October 4), they would have likely thought their opponents would be the Titans or Trinidad & Tobago. While both are fine teams, Chennai Super Kings as opponents carry a greater aura, especially in India, and Rajasthan's final match at home in 2013 is also likely to be their toughest.

Not that Rajasthan will be underdogs by any stretch, coming in with a perfect 12-0 record at home this year, but as Chennai have shown, they more than any other team in the short history of franchise cricket in India are able to raise their game when it counts.

Chennai are also not generally in the habit of having two consecutive bad games, and the collapse against Trinidad & Tobago on Wednesday could be seen as the bad day out of the way. While being bowled out for 118 is cause for worry, Chennai might have gone into the match a little undercooked and with their intensity off, as Stephen Fleming, the coach, suggested.

That is something they cannot afford against Rajasthan in Jaipur. Chennai have played in Ranchi and Delhi in the CLT20, and the conditions they'll encounter at Rajasthan's fortress will be very different, with more bounce and seam movement on offer.

Rajasthan have been the form team of the tournament, the only unbeaten team so far. What is more impressive, they have done that without a match-winning contribution from Shane Watson, who Chennai will be wary of. In IPL VI, Watson was in terrific form, hitting a century in Chennai and 70 off 34 balls in Jaipur. Watson came to India on the back of big runs for Australia in England, and what with him sweating it out diligently in the nets here, it must be a matter of time before he plays a defining knock.

The batting star for Rajasthan has been Brad Hodge, who has come in at No.6 and put the bowlers to the sword with inventive and audacious strokeplay, while Ajinkya Rahane has been very consistent at the top of the order, lending depth and flexibility. Amongst the bowlers, Rajasthan have found someone to step up when the occasion has demanded, with each of Vikramjeet Malik, Pravin Tambe, Kevon Cooper and Rahul Shukla playing the starring role. Tambe has been particularly impressive with his flight, dip and wrong 'uns, while Shaun Tait, who hasn't featured so far, had his most extended bowling session on Thursday in the nets.

Tait's extended session might have been aimed at getting the batsmen used to facing Jason Holder, but with Rajasthan known to spring a surprise or three every match, it could also be a signal that he will figure in the team management's starting XI plans.

Chennai, who reached Jaipur only late in the day, opted to forego practice, and will thus take on Rajasthan in their own den without an immediate feel of the conditions, unless they make a quick trip on Friday morning before the 8pm semifinal. Chennai had blown away all opposition before crumbling against Trinidad & Tobago, showing much the same form that helped them top the league stage in IPL VI. Mahendra Singh Dhoni and Suresh Raina in particular, have struck the ball cleanly and hard, while R Ashwin has been his usual parsimonious self.

If there's one team capable of upsetting Rajasthan's applecart even with low preparation and after a heavy defeat, it's Chennai. Equally, if there's one team who you wouldn't hesitate to back to beat Chennai, it's Rajasthan in home conditions. As the tournament winds down to its final weekend, you can't ask for a better clash.

Comments
Topics mentioned in this article
Cricket Rajasthan Royals Chennai Super Kings Champions League Twenty20 2013 MS Dhoni Rahul Dravid
Get the latest updates on India vs South Africa and check out  Schedule, Results and Live Score. Like us on Facebook or follow us on Twitter for more sports updates. You can also download the NDTV Cricket app for Android or iOS.