Though Rohit's unbeaten 51 off 28 couldn't prevent India from suffering a 5-run defeat, his courageous effort earned him plenty of respect from fans, peers and cricket pundits

India captain Rohit Sharma showed great courage as he came out to bat at No. 9 spot despite having injured his thumb earlier in the 2nd ODI against Bangladesh. Rohit risked aggravating the injury but knew that his team needed him in that moment. Though Rohit's unbeaten 51 off 28 couldn't prevent India from suffering a 5-run defeat, his courageous effort earned him plenty of respect from fans, peers and cricket pundits. Even his wife Ritika Sajdeh posted a beautiful Instagram story as she saw Rohit coming out to bat.

Taking to Instagram, Ritika wrote: "I love you, and I'm so proud of the man you are. To go out like that and do that." 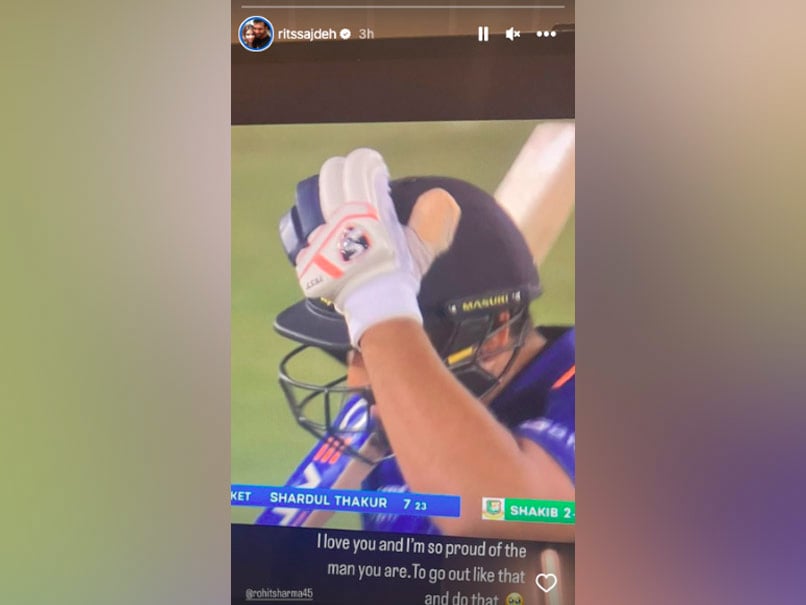 Rohit, speaking at the post-match presentation ceremony, admitted that there's dislocation of thumb but also confirmed that he hasn't sustained a fracture. While the Hitman himself couldn't clarify for how long he will be out, head coach Rahul Dravid ruled him out of the 3rd ODI.

"It (thumb injury) isn't too great. Some dislocation and some stitches. Fortunately, not a fracture, so I was able to bat," Rohit said.

Dravid, in the press conference later on Wednesday, said that Rohit will fly to Mumbai to get his thumb injury analysed. Only after a through check is done will his participation in the Test series be cleared.

"We are struggling with a few injuries as well. Not ideal. Kuldeep, Deepak and Rohit will certainly miss the next game. Rohit will miss the next game, fly back to Bombay, consulting with an expert. Whether he will return for the Test series or not, I am not sure. It's too early to say," he said.

It was the second successive occasion that India lost an ODI series in Bangladesh. While the tourists would look to salvage some pride by winning the 3rd and final ODI on Saturday, the focus will be to bounce back hard in the forthcoming Test series.

Bangladesh Cricket Team Bangladesh vs India, 2022/23 Cricket
Get the latest updates on IPL Auction 2023 and check out  IPL 2023 and Live Cricket Score. Like us on Facebook or follow us on Twitter for more sports updates. You can also download the NDTV Cricket app for Android or iOS.