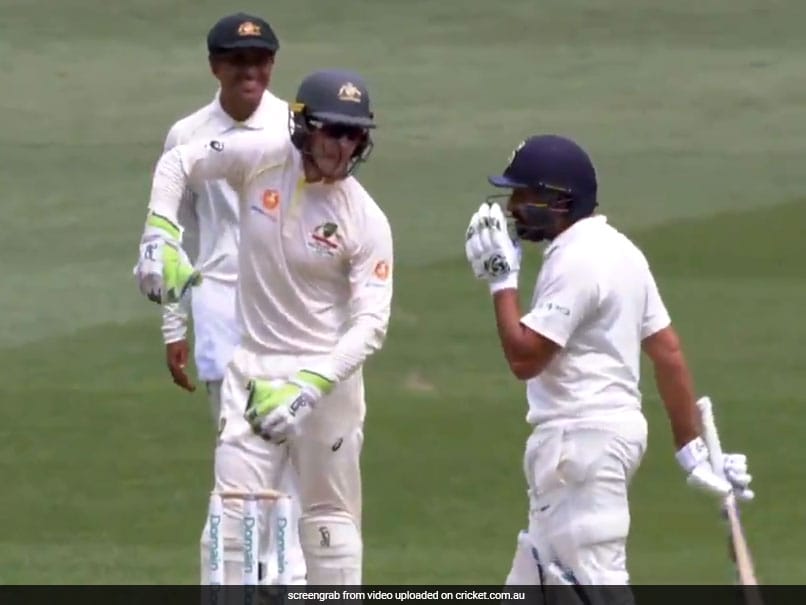 Tim Paine's chatter went on for a couple of overs but Rohit Sharma did not react.© Twitter

Australia captain Tim Paine has not shied away from talking from behind the stumps during the ongoing Test series. With India building a commanding first innings total on the second day of the third Test in Melbourne, Paine was again feeling chatty. Paine challenged Rohit Sharma to hit a six against Nathan Lyon. Paine kept talking to Aaron Finch to distract Rohit Sharma, who was on strike at that time. Paine told Finch that he will start supporting Mumbai Indians (MI) in the Indian Premier League (IPL) if India's limited-overs vice-captain manages to hit a six at the MCG. "It's a bit of a toss up between Royals and Indians for me. But if Rohit hits a six now, I'm changing to Mumbai," Paine told Finch.

Paine's chatter went on for a couple of overs but Rohit did not react.

"Too many Poms at the Royals," Paine said referring to Ben Stokes and Jos Buttler.

Paine, who was also overheard whistling the Collingwood theme song, could not get a reaction from Rohit so he turned his attention to Finch.

Finch has played for Rajasthan, Delhi, Pune, Hyderabad and Mumbai in the IPL.

Paine took to sledging during Perth Test as well. "I know he's your captain. But you can't seriously like him as a bloke," he asked Murali Vijay.

Paine was also involved in a heated battle, which at one point needed the umpire to intervene, with animated Indian skipper Virat Kohli during the second Test in Perth.

Melbourne Cricket Ground Australia vs India 2018/19 Cricket
Get the latest updates on ICC Women's Cricket World Cup 2022 and IPL 2022, check out the Schedule , Live Score and IPL Points Table. Like us on Facebook or follow us on Twitter for more sports updates. You can also download the NDTV Cricket app for Android or iOS.