MS Dhoni
Listen to the latest songs, only on JioSaavn.com
Aus vs Ind 21 Nov 18 to 18 Jan 19
Sports Home
Story ProgressBack to home

During a drinks break of the second ODI between India and Australia, MS Dhoni scolded Khaleel Ahmed for stepping on the pitch. 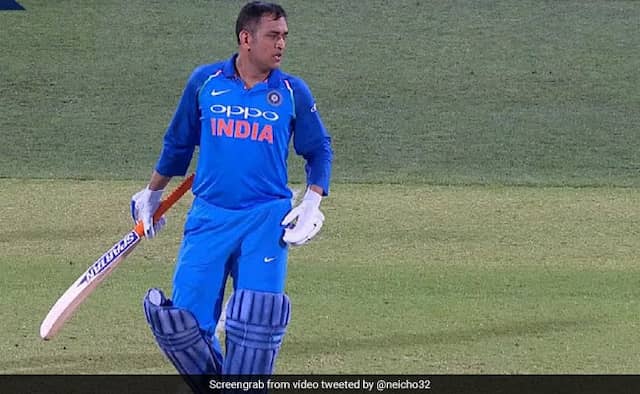 MS Dhoni usually maintains his composure even when there's utter chaos. But on Tuesday during the 2nd One-day International in Adelaide, the former Indian captain lost his cool while chasing a 299-run target set by Australia. Dhoni snapped at Khaleel Ahmed, who had stepped on the pitch while delivering water to the batsmen. Dhoni and Karthik still had their hearts in mouth as India had quite a long way to go in the match. Guess Khaleel Ahmed was at the wrong place at the wrong time. Watch this video:

Khaleel deserved this bashing from Dhoni. Absolutely lethargic display by Khaleel Ahmed on field. What an innings by MSD. #INDvAUS #AUSvIND pic.twitter.com/uQOCJxfSq6

Later in the match, MS Dhoni smashed the winning run, helping India clinch the match by six wickets. Virat Kohli had scored his 39th hundred and MS Dhoni impressed with an unbeaten half-century. Kohli and Dhoni shared an 82-run stand for the fourth-wicket to keep India on the winning course despite chasing a tough 299-run target. With the thrilling last-over win, India levelled the ODI series 1-1, having lost the opening match in Sydney by 34 runs. The decider of the series will be played in Melbourne on Friday.
Virat Kohli top-scored for India with 104 runs, while Dhoni contributed an unbeaten 55 not out to lead India's chase. Dinesh Karthik played a brilliant cameo towards the end of the Indian innings and was unbeaten on 25 as India reached the target with four balls to spare.

MS Dhoni Khaleel Ahmed Australia vs India 2018/19 Cricket Australia vs India, 2nd ODI
Get the latest Cricket news, check out the India cricket schedule, Cricket live score . Like us on Facebook or follow us on Twitter for more sports updates. You can also download the NDTV Cricket app for Android or iOS.