Second T20I Called Off Due To Rain In Melbourne, Australia Lead Series 1-0 vs India 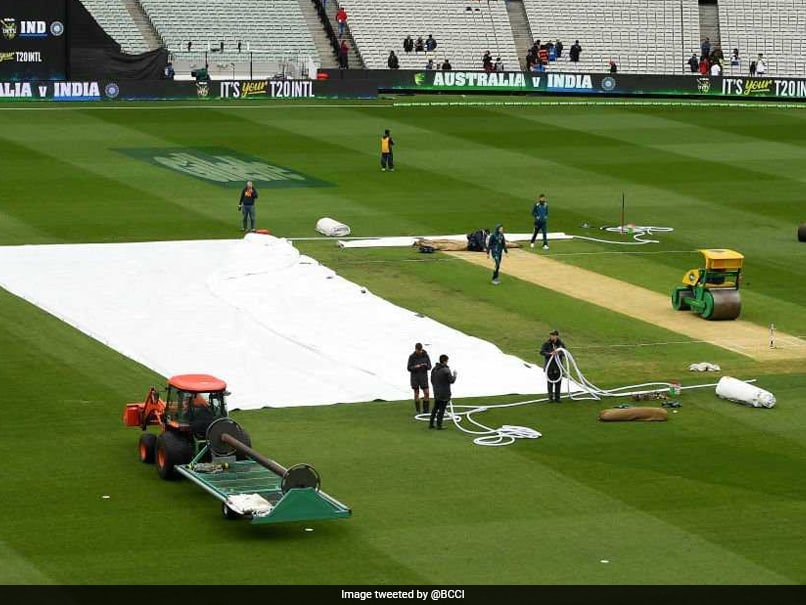 The second T20 International between India and Australia of the three-match series was called off due to rain on Friday in Melbourne and the hosts maintain a 1-0 lead in the series, courtesy their win in Brisbane. After the rain shortened the first game at the Gabba, Melbourne turned out worse as the match had to be called off after 19 overs of the Australian innings. As it continued to drizzle, the umpires were unable to get the match restarted. India were initially set a revised Duckworth-Lewis-Stern (DLS) method target of 137 in 19 overs which was later reduced to 46 off five overs but as downpour continued, umpires finally took the decision to abandon the match.

Earlier, after winning the toss, India skipper Virat Kohli opted to bowl first against the hosts in overcast conditions. Going in the match with the same playing XI, pacers Bhuvneshwar Kumar (2-20) and Khaleel Ahmed (2-39) provided India with an excellent start.

Bhuvneshwar removed Australian skipper Aaron Finch for a duck on the second ball of the match. Explosive top-order batsman Chris Lynn (13) got off to a good start but then played a poor shot getting out in the fourth over. Opener D'Arcy Short (14) followed Lynn, leaving his side reeling at 37 for three after just 5.3 overs. All-rounder Marcus Stoinis also fell cheaply for 4, putting his side further into trouble.

Glenn Maxwell and Ben McDermott tried to steady the Australian innings with a 21-run partnership but Maxwell perished for 19, trying to up the scoring rate.

Towards the end, Nathan Coulter-Nile (20 off 9 balls) and McDermott (32 not out) played responsible knock helping their team post a respectable total.

For India, it was an all-round performance from the bowlers. Apart from Bhuvneshwar and Khaleel, Jasprit Bumrah (1-20), Kuldeep Yadav (1-23) and Krunal Pandya (1-26) bagged a wicket apiece.

The third and final match of the T20I series between the two teams will be played at the Sydney Cricket Ground on 25th November.

Melbourne Cricket Ground Australia vs India 2018/19 Cricket Australia vs India, 2nd T20I
Get the latest updates on ICC Women's Cricket World Cup 2022 and IPL 2022, check out the Schedule , Live Score and IPL Points Table. Like us on Facebook or follow us on Twitter for more sports updates. You can also download the NDTV Cricket app for Android or iOS.