India vs Australia 2nd T20I Called Off Due To Rain, Hosts Lead Series 1-0

Highlights, India vs Australia 2nd T20I: With second match being called off due to rain, the hosts still lead three-match T20I series 1-0. 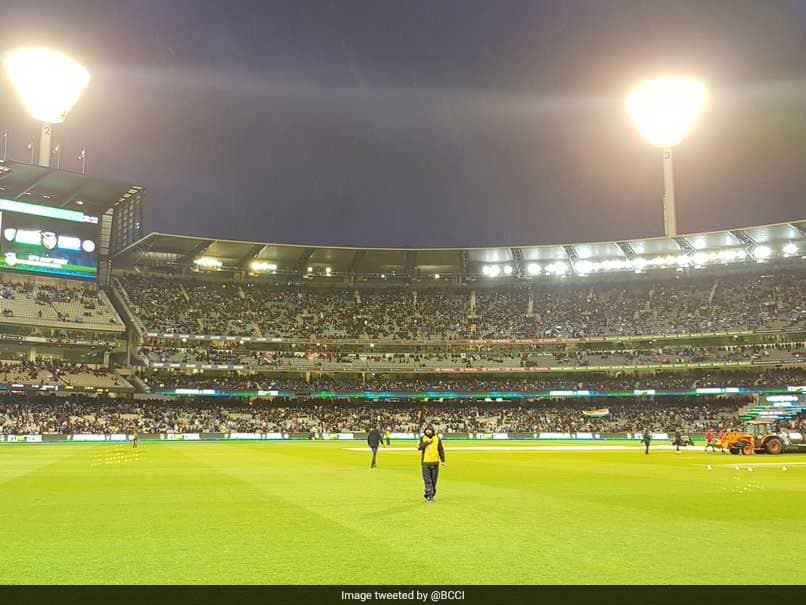 Highlights, India vs Australia 2nd T20I: The second T20I was called off due to rain.© Twitter

Rain played spoilsport again as the second T20I between Australia and India was abandoned on Friday. After the rain shortened the first game in Brisbane, Melbourne turned out even worse as not a single delivery was bowled after 19 overs of the Australian innings. With the second match now being called off, Australia still lead the three-match T20I series 1-0 against India. Earlier, riding on a terrific bowling effort from the seamers, India restricted Australia to a moderate 132 for seven in 19 overs as rain halted the match. India were set a revised DLS target of 137 in 19 overs which was once again changed to 46 off five overs. But the continuous downpour never allowed the umpires to resume the game. (SCORECARD)

After winning the toss, Indian skipper Virat Kohli opted to bowl and pacers Bhuvneshwar Kumar (2-20) and Khaleel Ahmed (2-39) made full use of the overcast conditions, rattling the Australian top order. Bhuvneshwar dismissed Aaron Finch (0) in the first over with an away swinger. Chris Lynn (13) got off to a good start but then played a poor shot. Opener D'Arcy Short followed Lynn soon, leaving his side reeling at 37 for three. Marcus Stoinis also departed cheaply, putting Australia further into trouble. Glenn Maxwell (19) and Ben McDermott tried to steady the Australian innings but the former got out trying to up the scoring rate. Towards the end, Nathan Coulter-Nile (20 off 9 balls) and Ben McDermott (32 not out) played handy knocks, helping their team post a fighting total. For India, it was a combined bowling effort as all the bowlers chipped in with wickets at regular intervals. Apart from Bhuvneshwar and Khaleel, Jasprit Bumrah, Kuldeep Yadav and Krunal Pandya bagged a wicket apiece.

Highlights of the 2nd T20I between India and Australia, straight from Melbourne Cricket Ground, Melbourne

16:40: IST: Thank you for joining our live coverage of the 2nd match. Do join us for the final T20I at Sydney on Sunday.

UPDATE: If play doesn't resume before 10:02pm local time then the match will be abandoned... #AUSvIND https://t.co/4RaLpNkrJn

16:06 IST: And it has started raining again! Just as the players were entering the ground, it started drizzling again and the players are going back into the dugout.

YOU'VE GOT TO BE KIDDING!

The players run out, only for the rain to return AGAIN. Covers back on... #AUSvIND https://t.co/4RaLpNkrJn

16:05 IST: Match to start in a couple of minutes. Change in target for India!

Innings break - Revised target for India is 137 from 19 overs.

India need 137 from 19 overs according to the DLS method!

15:31 IST: Australian innings has come to an end. They finish with 132 for seven in 19 overs. DLS has come into play and India now have a revised target to chase.

15:14 IST: Oh no! The covers are coming back on again. This will be frustrating for the players.

15:09 IST: Great news coming in! Play will start in next five minutes.

Covers starting to come off at the 'G... #AUSvIND https://t.co/4RaLpNkrJn

14:52 IST: Rain stoppage - It has started raining heavily now and the umpires have decided to stop the game. Players are walking back to the pavilion and the covers are coming on.

The rain is getting heavier and the players are coming off at the MCG...

14:50 IST: FOUR! Boundary to end the over from Jasprit Bumrah. Ben McDermott places the ball beautifully to the right of wicket keeper Rishabh Pant to collect four runs. Third man had no chance to cut that off. AUS 137-7 after 19 overs.

14:44 IST: SIX! Big over for Australia. 19 runs from it. Ben McDermott launches Khaleel Ahmed's final ball over the deep mid wicket to collect six runs. Expensive over from Khaleel finally comes to an end.

14:41 IST: FOUR! Little bit of width from Khaleel Ahmed outside off and Ben McDermott frees his arms. Hits the ball through cover region to collect four runs.

14:40 IST: Tight over from Jasprit Bumrah comes to an end. Just two runs from it. Khaleel Ahmed will now ball from the other end. AUS 103-7 after 17 overs.

14:34 IST: OUT! What a comeback from Bhuvneshwar Kumar. After getting slogged for a six on the previous ball Bhuvneshwar, this time bowls a short pitched delivery on the off side. Nathan Coulter-Nile goes for the aerial shot but hits the ball straight into the hands of Manish Pandey at deep point. Coulter-Nile walks back after scoring 18 runs. AUS 101-7 after 16 overs.

14:31 IST: Nine-run over from Krunal Pandya comes to an end. He finishes with figures of 1-26. Bhuvneshwar Kumar comes back into the attack. AUS 92-6 after 15 overs.

14:25 IST: SIX! Tossed up delivery from Kuldeep Yadav and Nathan Coulter-Nile hits him straight down the ground to collect six runs. AUS 80-6 after 13.3 overs.

14:22 IST: OUT! Wicket for Kuldeep Yadav on the first ball of his final over. Good length delivery from Kuldeep and Alex Carey goes for the aerial shot on the leg side. Fails to time the ball and Krunal Pandya takes a simple catch in the deep.

14:19 IST: FOUR! Full length delivery from Kuldeep Yadav and Ben McDermott plays the ball fine on the leg side to collect four runs. Brilliant placement from McDermott on that occasion. AUS 69-5 after 12 overs.

14:15 IST: OUT! Big wicket for India. Dangerous Glenn Maxwell walks back after scoring 19 runs. Krunal from round the wicket just manages to spin the ball away from the right-hander. The ball hits the front pad of Maxwell and hits the top of the off stump. AUS 62-5 after 11 overs.

14:13 IST: FOUR! Krunal Pandya drifts onto the pads and Glenn Maxwell sweeps him fine to collect his first boundary of the match.

14:11 IST: 10 overs are up and Australia have have 54 runs on the board for the loss of four wickets. Terrific over from Kuldeep Yadav comes to an end. Just two runs from it. Krunal Pandya will continue from the other end.

14:05 IST: Tidy over from Kuldeep Yadav comes to an end. 5 runs from it. Another bowling change for India. Krunal Pandya comes in to replace Jasprit Bumrah. AUS 46-4 after 8 overs.

13:59 IST: OUT! Absolutely brilliant from Jasprit Bumrah. Short pitched delivery outside off from Bumrah and Marcus Stoinis goes for the upper cut. Fails to time the ball and Dinesh Karthik takes a good catch in the deep. Stoinis walks back after scoring four runs. AUS 41-4 after 6.3 overs.

13:52 IST: OUT! Second wicket for Khaleel Ahmed. Short pitched delivery from the left-hander and D'Arcy Short goes for the pull shot. Gets the bottom half of the bat and drags it back onto the stumps. Australia in big trouble at the moment. AUS 35-3 after 5.3 overs.

13:49 IST: FOUR! Boundary to end the first over from Jasprit Bumrah. Wide delivery outside off from Bumrah and D'Arcy Short cuts the ball to collect four runs. Great timing on that occasion from the left-hander. AUS 34-2 after 5 overs.

13:42 IST: OUT! Brilliant running catch from Krunal Pandya. Khaleel Ahmed strikes for India. Wide off-cutter from Khaleel and Lynn goes after it. Mistimes the ball and Krunal takes an excellent catch in the deep. Dangerous Lynn walks back after scoring 13 runs. AUS 27-2 after 3.5 overs.

13:41 IST: FOUR! Khaleel Ahmed from round the wicket gives a juicy full toss to Chris Lynn and he hits the ball straight down the ground to collect four runs.

13:35 IST: Dropped and SIX! Knuckle ball from Bhuvneshwar Kumar and Chris Lynn goes for the big shot on the leg side. The ball bounces off the hands of Jasprit Bumrah at fine leg and goes over the fence. Misjudgment from Bumrah at the boundary line and Bhuvneshwar is not happy with the effort. AUS 16-1 after 2.4 overs.

13:29 IST: FOUR! First boundary of the match for Australia. Full length delivery from Khaleel Ahmed and D'Arcy Short hits the ball straight down the ground to collect four runs. AUS 6-1 after 1.3 overs.

13:26 IST: Successful over from Bhuvneshwar Kumar comes to an end. Two runs and a wicket from it. Khaleel Ahmed will share the new ball with Bhuvneshwar from the other end. AUS 2-1 after 1 over.

13:22 IST: OUT! First ball duck for Aaron Finch. Terrific delivery from outside off from Bhuvneshwar Kumar. Takes the outside edge of Finch's bat and Rishabh Pant does the rest behind the stumps. Great start for India! AUS 1-1 after 0.2 overs.

Ideal start for India at the MCG.

13:21 IST: Australia are off the mark straightaway. On the pads from Bhuvneshwar Kumar and D'Arcy Short takes a comfortable single. AUS 1-0 after 0.1 overs

13:20 IST: Openers D'Arcy Short and Aaron Finch are out in the middle for Australia. Bhuvneshwar Kumar will start the proceedings for India. One slip in position for Bhuvneshwar. Here we go!

Late change with NCN in for Big Billy #AUSvIND

Australia forced to make a late change after an injury in the warm-up at the MCG: https://t.co/XunyP0KB9o #AUSvIND pic.twitter.com/jl17lyiidi

Covers coming off and both teams are out in the middle warming up. Things looking good! #AUSvIND pic.twitter.com/bCY2ATzSSV

12:33 IST: Weather update - Overcast conditions at the moment in Melbourne with a little bit of drizzle.

Chill
Rain
Hoping to get a bit clear. Hello and welcome to the G #TeamIndia #AUSvIND pic.twitter.com/GCl9YySgeV

12:30 IST: Hello and welcome to our live coverage of the 2nd T20I between India and Australia in Melbourne.

The team management could also be tempted to have a re-look at the bowling attack. On a grassy surface, Krunal Pandya was plundered for 55 runs in his four wicketless overs and was hit for as many as half-a-dozen sixes. If the MCG is also of Gabba's nature, Kohli might be tempted to bring in leg spinner Yuzvendra Chahal, who boasts of a brilliant wicket-taking record in T20Is. Even then, it remains to be seen if the team management rings in any changes after such a close defeat, especially when the balance is disturbed. Leaving Pandya out would leave them a batsman short and Kohli might not be keen on taking that gamble. The loss, however narrow, has indeed cast such minute doubts on the Indian team's strategic preparations in a format, which they have dominated since July 2017. In the lead-up to the first match, skipper Kohli had spoken about the need to cut down on mistakes and regaining an upper hand at crucial junctures of a game.

At Brisbane, the 'Men in Blue' were found slacking in the field and it proved to be the ultimate difference in a seesawing game. Even Kohli himself was guilty of poor effort on the field on at least two occasions, dropping counterpart Aaron Finch in the fourth over and later involved in a mis-fielding from the deep. Australia boasts of bigger grounds than in India, with bigger boundaries of course, and the MCG will prove to be another humongous challenge in that regard. The task is cut out in front of the team management to work on fielding angles to elevate their efforts in the second T20I. It doesn't help that there is such a short turn-around time during this series, that fielding coach R Sridhar won't be able to work with the players at the MCG.

Any improvements in the field will have to be drilled in theoretically in the dressing room. And thus India will also seek to look at other areas where improvements can be made. The ploy to introduce Adam Zampa as the lone spinner worked wonders for Australia and with an intense fielding effort, Australia were able to make a winning difference. Things seem very different in the hosts' camp all of a sudden, when they were simply considered second best to the Men in Blue across all departments less than 48 hours ago. Melbourne is experiencing a stormy spell in the latter half of this week, so there is a slight chance that the second T20I could also be rain-affected.