Ravindra Jadeja starred with both bat and ball in the Asia Cup final against Bangladesh. 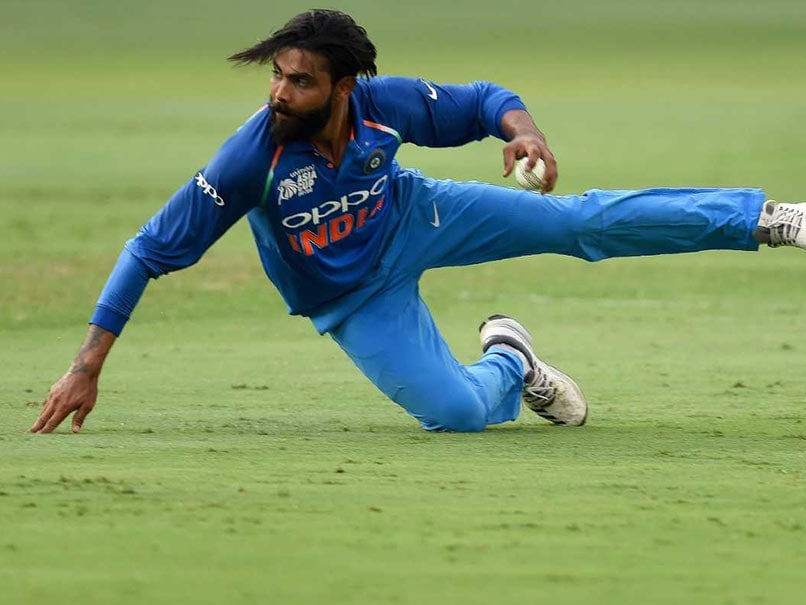 Ravindra Jadeja is known for his sensational fielding skills and it was once again on display in the Asia Cup 2018 final between India and Bangladesh. It was the last ball of the 27th over of Bangladesh's batting innings when teammate Yuzvendra Chahal was bowling to Bangladesh opener Liton Das with Mohammad Mithun at the other end. A huge confusion between the two batsmen coupled with Ravindra Jadeja's brilliant reflexes, Mohammad Mithun fell short and stranded off his crease. The ball which was flighted outside off, Das had drilled the ball towards extra cover which was racing towards the boundary. Jadeja somehow intercepted the ball with a full-length dive to his left lobbing it straight to Chahal and effecting a simple run-out.

The two images best describe what Sir Jadeja n MSD can do!! Even though we trolled Jaddu n criticized him, but believe me this run out by Jadeja has a great impact on the final match of Asia Cup. #AsiaCup18 #asiacupfinal2018 #INDvBAN pic.twitter.com/S21SLOerbR

There are batting all rounders!

There are bowling all rounders!

Then there is Ravindra Jadeja the fielding all rounder!

Fantastic effort by the bowlers to restrict Bangladesh after the start they got. Liton Das played a gem , run out by Jadeja was a big moment.#AsiaCupFinal

In a match going down the wire, Jadeja (23) and Bhuvaneshwar Kumar's (21) sensible knock helped India pip Bangladesh by three wickets in a thrilling Asia Cup final. The win also shattered Bangladesh's dream of their maiden Asia Cup title while the Rohit Sharma-led Indian side clinched the prestigious title for a record seven times.

Speaking after the match, Jadeja said he wanted to prove himself after staying out of the Indian team for almost 15 months. "I was almost out for 15 months and I wasn't feeling good. I want to play white-ball cricket, I just wanted to prove myself and improve on my game. You need to prove yourself when you get the opportunity, you need to show you are good enough. I just wanted to play my natural game, try and hit the ball well and win the game for my country", he said.

Ravindra Jadeja Asia Cup 2018 India vs Bangladesh, Final Cricket
Get the latest updates on ICC Women's Cricket World Cup 2022 and IPL 2022, check out the Schedule , Live Score and IPL Points Table. Like us on Facebook or follow us on Twitter for more sports updates. You can also download the NDTV Cricket app for Android or iOS.