India beat Bangladesh by 3 wickets in the final to retain the Asia Cup title. 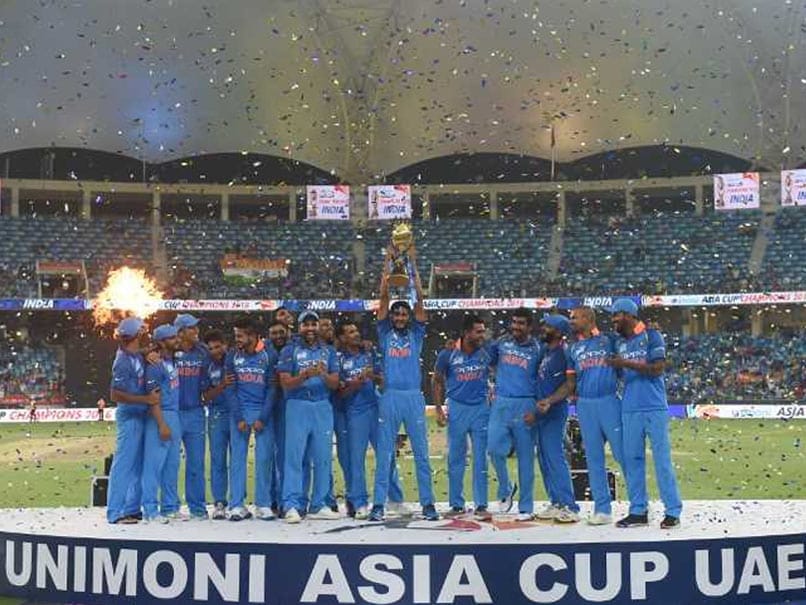 India retained the Asia Cup title by beating Bangladesh by three wickets in the final.© AFP

India retained the Asia Cup title by beating Bangladesh by three wickets in a last-ball finish at the Dubai International Cricket Stadium on Friday. In what was a repeat of the 2016 final (played in T20I format), India overhauled the 223-run target set by Bangladesh on the final ball of their innings. Liton Das hit a maiden ODI century for Bangladesh but found no support from the other batsmen. It was a spirited effort from the Bangladesh team in the field but some solid batting from India's lower order thwarted the Bangladeshis.

Chasing 223 to win, captain Rohit Sharma got India off to a solid start. With India motoring along in the chase, Nazmul Islam struck to remove Shikhar Dhawan (15) in the fourth over.

Ambati Rayudu (2) didn't last too long either as Bangladesh sniffed an opening.

Rohit, however, was having none of it and continued to attack the Bangladesh bowlers. But after the 12th over, the Bangladeshis put the brakes on India's scoring rate. In his bid to up the ante, Rohit fell at the square leg boundary trying to hit his fourth maximum of the match.

With India in a spot of bother at 83 for three, Dinesh Karthik and MS Dhoni steadied the ship. The duo added 54 runs for the fourth wicket to put India back on track in the chase.

Dhoni then added another 23 runs with Kedar Jadhav (23 not out) but fell to Mustafizur Rahman in the 36th over.

Bangladesh were back in the business and with the run-rate rising, India came under immense pressure. There was more trouble for India as Kedar Jadhav had to retire hurt on 19 due to a hamstring problem.

Ravindra Jadeja and Bhuvneshwar Kumar showed steely grit under difficult circumstances. The duo found the going hard initially but grew into their role.

Jadeja (23) and Bhuvneshwar (21) strung together a 45-run stand for the sixth wicket to take India to the brink of victory.

But there was a twist in the tale. Jadeja fell to Rubel Hossain and the very next over Bhuvneshwar departed, leaving the injured Kedar Jadhav and Kuldeep Yadav to get the job done.

India then required six off the last over and one off the final delivery which came as a leg-bye. Kedar Jadhav finished with 23 not out.

Earlier Bangladesh lost all their wickets for 102 runs in a major middle order collapse after a brisk opening stand of 120.

Hasan was promoted to open the innings and he and Das attacked India's pace-cum spin attack.

But once Hasan was caught off Jadhav in the 21st over the innings collapsed with Bangladesh losing four more wickets by the time the score reached 151.

Hasan hit three boundaries in his 59-ball 32 while Soumya Sarkar made a 45-ball 33 with a boundary and a six.

Former captain Mushfiqur Rahim, who scored 144 and 99 earlier in the tournament, also hold out off Jadhav who finished with 2-41. Rahim made just five.

Bangladesh's cause was not helped by three run-outs while left-arm spinner Kuldeep Yadav returned with the best figures of 3-45.

Bangladesh Cricket Team Asia Cup 2018 India vs Bangladesh, Final Cricket
Get the latest updates on ICC Women's Cricket World Cup 2022 and IPL 2022, check out the Schedule , Live Score and IPL Points Table. Like us on Facebook or follow us on Twitter for more sports updates. You can also download the NDTV Cricket app for Android or iOS.