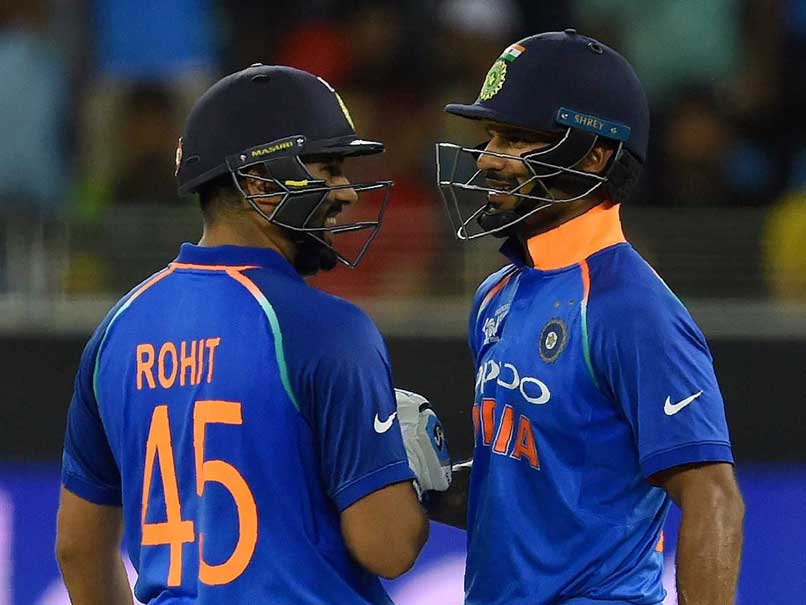 India completely outclassed arch-rivals Pakistan by 8 wickets in their Asia Cup clash on Wednesday in Dubai. Skipper Rohit Sharma (52) led from the front with a fine fifty alongside opening partner Shikhar Dhawan (46) to reach the modest target of 163 set by Pakistan. India reached the target (164/2) in 29 overs. Both openers Rohit Sharma and Shikhar Dhawan stitched together an 86-run partnership for the first wicket taking complete control of the proceedings. Rohit's inning was laced with six boundaries and four sixes. Pakistan spinner Shadab Khan finally broke the partnership between Dhawan and Rohit after beating the latter with a googly in the 14th over (13.1).

This was India's most comprehensive victory in terms of balls remaining (126). After a wake-up call against Hong Kong, the Pakistan match was a near perfect performance for India as Bhuvneshwar Kumar (3/15 in 7 overs) and Kedar Jadhav (3/23 in 9 overs) were perfectly complemented by Jasprit Bumrah (2/23 in 7.1 overs) and Kuldeep Yadav (1/37 in 8 overs). If Kuldeep's googly to snuff out Babar Azam was the turning point, Kedar Jadhav's unconventional side-arm off-breaks broke the lower middle-order as Pakistan never recovered from the batting collapse.

With the pressure of scoreboard virtually non-existent, Rohit and Dhawan showed why they are one of the most formidable opening pair in white ball cricket.

The eighth over from Usman Khan enabled India cut loose as Rohit first hooked him for a six using the pace of the delivery and followed it with a 'Nataraja' pull shot for a boundary and then short arm pull in-front of the square for another six. With 19 runs coming off that over, there was no looking back for India.

Rohit's third six was another hook shot off Hasan Ali followed by a drive through mid-off to complete his 35th half century in ODIs. He was fooled by a googly from Shadab Khan but by then India were on course for a comprehensive victory.

Ambati Rayudu and Dinesh Karthik both contributed 31 to take India past finish line with consummate ease. The two teams will now meet in Super Four on September 23. Earlier Jadhav produced a laudable performance as he did the job of a frontline spinner after Hardik Pandya (0/24 in 4.5 overs) was stretchered off the field due to an acute lower back injury.

This was after young Babar Azam (47) and veteran Shoaib Malik (43) added 82 runs for the third wicket and looked like taking control of the proceedings. However, Pakistan suffered a batting collapse losing five wickets for 36 runs before Faheem Ashraf (21) and Mohammed Aamir (16) added an invaluable 37 runs for the eighth wicket to take the total past 150-run mark.

Put into bat, Pakistan were in trouble straight away as Bhuvneshwar dealt a twin blow removing the in-form duo of Imam ul Haq (2) and Fakhar Zaman (0) to reduce them to 2 for 3.

Imam charged to a short of length delivery that climbed on him and the thickish outside edge was taken by Dhoni. Zaman, India's tormentor in the Champions Trophy, mistimed a pull-shot and Yuzvendra Chahal took a well-judged catch. Babar and Malik then resurrected the innings with a fine partnership. The half-volleys on both sides of the wicket were driven with ferocity. Malik, who is a good player of spin bowling, gave Kuldeep Yadav the charge to hit him for a six and rotated the strike well.

In fact, Malik was dropped off Pandya's bowling, whose agonies increased when he had to leave the field.

Babar failed to read Kuldeep's googly as it clipped his off-bail. From 85 for 2, it soon became 100 for five as Pakistan lost wickets in a heap.

Sarfraz Ahmed (6) was dismissed by Jadhav as substitute fielder Manish Pandey took a blinder at long-on. The Pakistani batsmen found it extremely difficult to read Jadhav's round-arm action as he bowled straight and wide. Asif Ali was caught behind and then Malik was run-out by a direct throw from Ambati Rayudu.

Shadab Khan (8) was stumped by Dhoni as he became Yadav's third victim of the match. Faheem and Aamir did try their bit as Pakistan crossed the 150-run mark before Bhuvneshwar and Bumrah wrapped up the tail in the 44th over.

Shikhar Dhawan India vs Pakistan, Match 5 Cricket
Get the latest updates on T20 World Cup, check out the T20 World Cup Schedule and Live Score . Like us on Facebook or follow us on Twitter for more sports updates. You can also download the NDTV Cricket app for Android or iOS.